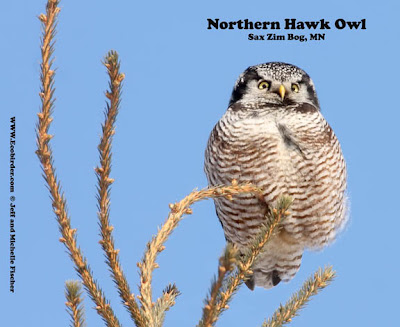 In 2009 I had a good year for photographing owls. Through out the year I photographed 6 different types of owls, as well as a seventh type at the owl banding at Hawk Ridge. Three of the owls made it into the calendar. The first owl that I photographed in 2009 was this northern hawk owl up at the Sax Zim Bog. Northern hawk owls are great to photograph because they are usually diurnal, active during the day, which makes for better pics. I was also able to photograph a great gray owl on that trip but it was at dusk so I had to turn up the ISO on the camera which made it too grainy to blow up big enough for the calendar. 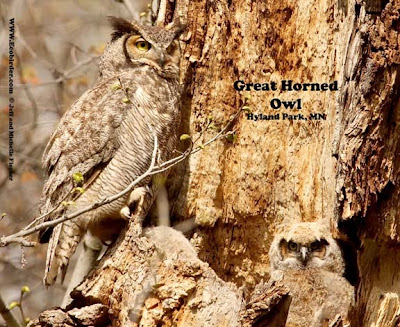 In late winter and early spring I was fortunate enough to be able to observe and photograph two great horned owl nests. The first one was in an old hawks nest that was located in a field across from a small strip mall. I had watched these owls raise a brood in 2008 and they were back in 2009. I began to watch the nest at the beginning of February, the female was already on the nest incubating her eggs, and visited regularly until the three chicks that they hatched fledged. In early May I learned about the second nest in a local county park. The nest was located in the hollow of a dead tree, which was cool because I had only seen this type of nest from a distance in Yellowstone prior to that. The chicks fledged soon after I found the nest but I was able to get a few good pics before they left including this one that ended up in the calendar. 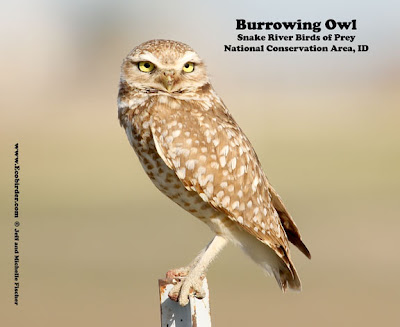 Burrowing owls can occasionally be found in the western portions of Minnesota but it is infrequent at best. This particular burrowing owl was photographed while on a visit to the Snake River Bird of Prey National Conservation Area in Idaho. We made a quick side trip to Snake River during the Snake River Bird of Prey Festival as part of our Yellowstone vacation. We did not have much time but we did sneak in a field trip where we went to man made burrowing owl dens and got to photograph both chicks and parents.
I also had the opportunity to photograph a eastern screech owl and a long eared owl but it was too late in the year to get them into the calendar.

Posted by Ecobirder at 8:45 PM

Owl are cool birds. Love them all.

Amazing shot of different owls, They are gorgeous and congrats to have your photo post in calendar. Great achievement you must be a professional photographer. Very well done. Thanks for sharing.

Wow! WoW! WOW!!! I've NEVER got an owl photo. These are absolutely outstanding.

So glad you stopped by Idaho's Snake River Birds of Prey area. That is my favorite place to find Burrowing Owls and other raptors.