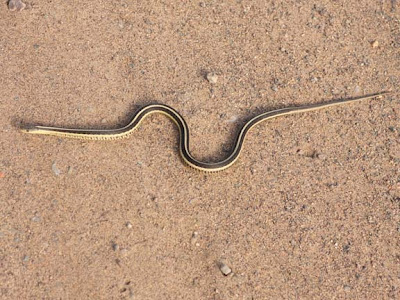 There are 17 different species of snakes found in Minnesota. That is a pretty small sample of the over 3000 snakes that are found around the world, however considering the cold climate that we have here in Minnesota I think that it is a respectable number. I think that most people living in Minnesota would be surprised by that number. Many have probably not seen many of the different types living here but most have probably seen the common garter snake. 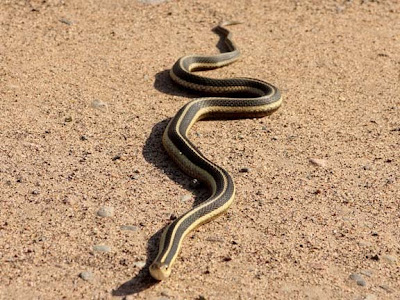 Garter snakes are named for the yellow stripes that run down their body which resemble the stripes on garter belts. The common garter is usually small to mid sized, although they can grow to lengths of over three feet long, and can be found in a variety of different habitats. The common garter eats small mammals, slugs, worms, insects, reptiles and amphibians, which it finds by following their scent. The snake will use its tongue to sample and collect trace chemicals in the air and the environment around it. It transfers these chemicals to the Jacobson's organ, located on the roof of the mouth, which transfers the information to the snakes brain. So even though they have nostrils these snakes, in effect smell, using their tongue.

Posted by Ecobirder at 6:34 PM

Ewwwwwwwww, I have a deep-rooted fear of snakes. Even if the ARE harmless. Ewwww.

LETTER TO GOD [written by a DoG] You'll need to scroll down a bit beyond my 3-D movie rant.

Have one super weekend!!

Lovely shots! That first one looks like a backwards "S".

Unlike most women, I think they are cute. ;-)

OMG... I wouldn't dare take that last shot. Thanks for sharing some important information about this snake too.

Nice capture. How far away were you to get that 2nd shot it's great? We only have 3 varieties of snake in the uk so getting shots like this is nigh impossible.

Fantastic capture, looks very neat. It's very close shot, I hope ur not that close on the snake too.

i have one in my backyard :)