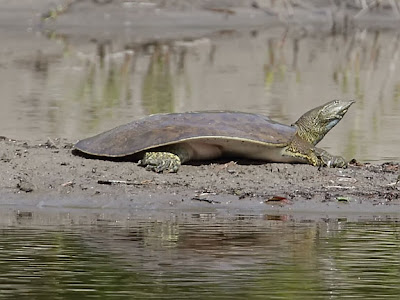 Although their name is some what of an oxymoron spiny softshell are one of several species of turtles that can be found in Minnesota. They are called softshell turtles because their shell is not as rigid as most other species of turtles. Instead it some what resembles tough leather. This different type of shell is helpful because it is more permeable then the shells of of other types of turtles. The more permeable shell allows them to breathe though their skin which is important because softshell turtles are more aquatic then other turtles. 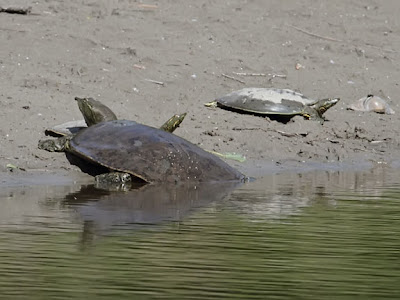 They are typically active from May until late September. They spend much of their time buried in the mud or sand at the bottom of streams, rivers or lakes. They can remain submerged for up to about 5 hours. They do not leave the water very often except to bathe in the sun or for the females to lay eggs. Even then they stay close to the water ready to dive in at the least sign of a predator. Female spiny softshells are much larger then their male counterparts, with females getting to a length of about 18" and males getting to about 9". This is demonstrated in the photo above.

Posted by Ecobirder at 9:38 PM

Such a lovely creature.

Wow, I've never heard about these before. But then again, we don't have any turtles where I live.

I have never seen them before, great photos and information.

its a special type