Thursday the weather cleared up so I decided to go to Wood Lake to check on the owls nest. When I arrived I found that the nest was empty. I could not believe that the owl had matured enough to fly away in just the couple days since I had last saw him. Then I ran into some people who recognized me from all of the times that I had been photographing the owls. They told me that the chick had fallen out of the tree and that the park naturalists had moved it to a basket so that it would not be disturbed by people. They showed me where the basket was and the baby was not looking to good. 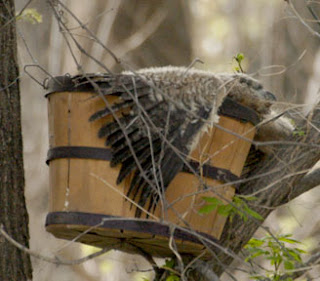 At this point I thought that it might be dead in the basket but then it moved it's head so I knew that there was still hope. 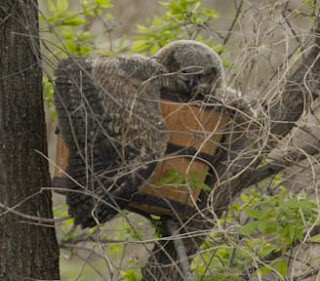 I returned Friday after work and the basket was gone. I found a park naturalist and asked what had happened. It seems that during the night the chick had passed away. They guess that it had some internal injuries from it's fall and this was the cause of it's death. It is very sad and unfortunate that this owl chick, who had touched a lot of lives at the park, did not survive but that is the way nature is some times. I did get a lot of great shots of the chick and the mother and I plan on posting a tribute or two.

Tomorrow I plan to travel to Crex Meadows in Wisconsin. This will be the first trip to Crex this spring and I hope that we have some good luck. I know the weather is supposed to be great so I should have fun.
Posted by Ecobirder at 2:33 PM