Well it looks like we may be finally catching up to spring here in Minnesota. Some of the snow has melted and it has gotten warm enough that I have been able to go out just wearing a light fleece jacket during the day. Of course there are many cities in the US that would close down if they had as much snow as we had left or the balmy low 40 degree highs that we have been enjoying. The birds have also begun to realize that it is spring and they have begun to migrate back over the past couple of weeks. 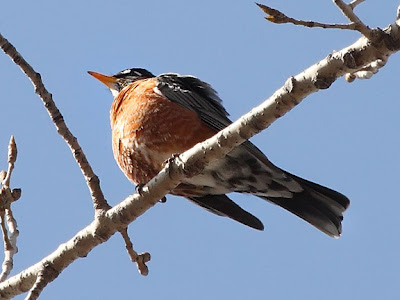 On March 20th I was able to get my first robin pic of the year at Wood Lake Nature Center. I had seen a few robins a week or two earlier but it was in my neighborhood as I was leaving for work so I could not get a pic. 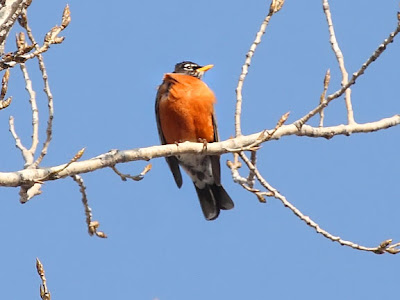 I returned to Wood Lake on March 26th and found some more robins to photograph. It is funny how excited we get to see birds like robins in the spring. These same birds will soon become common place and we will, for the most part, ignore them as we look for the exciting birds, like the various types of warblers that will be moving through. 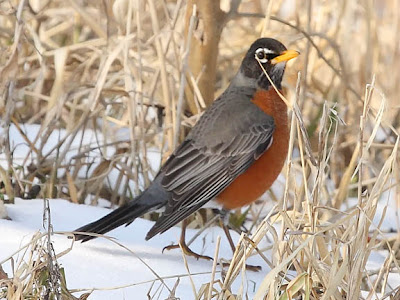 But for now I was so excited to get robin picks that I gave them their own post. I think that for a while, this spring, I will do a series of First for 2008 to highlight the first time that I am able to photograph a species that has returned to my area.
Posted by Ecobirder at 4:52 AM

To me there is nothing sweeter than the evening song of the robins. I'm glad they're back. I saw my first turkey vulture of the season yesterday.

Indeed. Robins are so easily overlooked and yet your pictures bring out their dignified beauty.
On Tuesday I was east of Forestville State Park and saw a flock of Robing in a pasture which must have numbered several hundred. Amazing