I took this picture back in 2005 at sunrise on a cold morning in Duluth, MN. We had spent a weekend birding out at the Sax Zim Bog but had spent the night in hotel in Canal Park. I got up early and took the shot from the beach behind the hotel. 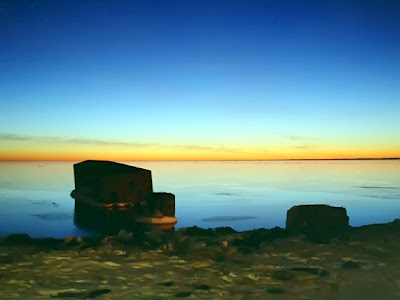 The dilapidated building in the picture I believe is an old boat house that is now a part of the lake. The photo is a bit grainy because it was originally shot on film and then scanned into digital form. I have been finding that many of my old negatives are beginning to degrade so I am trying to get them scanned into the computer.

Posted by Ecobirder at 3:04 AM

So often the sea is mirror calm just before sunrise. Nice shot.

lovely colors to this shot....gives it kind of an mystical quality.

Very unique, I absolutely love it.

Have a great weekend!
Guy
Regina In Pictures

I love the colors in that shot. Stunning.

What a beautiful shot with the smooth water and gold horizon.

How sad your negatives are beginning to degrade! Beautiful blue sky!

the colors are beautiful.

Just great, and the sun make this nice yellow colour.

Good photo for sky watch, the robin photos in the previous post are fantastic.

That is a very evocative capture!

I like a bit of grain.
The light is very beautiful - also the way the sunrise is reflected on the foundations of the hut (or is it a boat?)

This photo has such wonderful and clear colors. It looks like a photo turning into a painting at the bottom. Do you have Monet locked in your scanner?

What a neat picture!Sad to say,we're having the same problem with our older photos.

Despite the degredation the essence of a sensational image has been kept. I have scanned everthing I have ever done as negs really don't have the lifetime that digital does.

Outstanding. Beautiful colours on the horizon.

Very beautiful colors here on the horizon line. Lovely photo to share with the SkyWatch crew!

I hear ya on the old film prints... I've been thinking the same thing lately, but oh, what a job!

Very nice photo..the foreground looks very surreal. i wanted to make the photo larger by clicking on it to see what the foreground was all about..i still couldn't figure it out.