I have been hoping to get out and get some pictures of migrating waterfowl this spring so that I would have some new pics to post for Watery Wednesday. 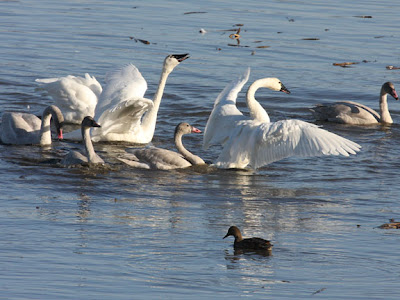 Unfortunately it seems like the waterfowl migration this year, at least around my house, is a bust. Last year I was out getting pics of ruddy ducks, horned grebes and red-breasted merganser but this year I feel fortunate if I see something other then a mallard or Canadian goose. 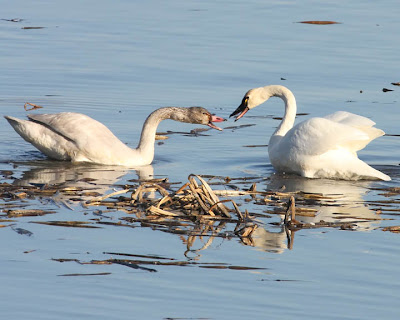 I have been out looking since the ice melted and the water opened up but I still have not seen a lot of waterfowl. 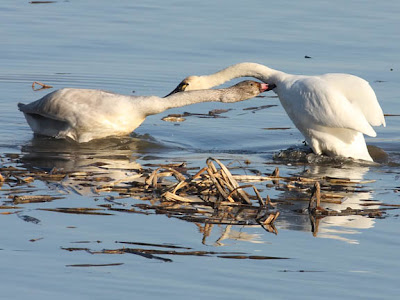 It may be that last year we had such a good spring migration, not only with waterfowl but with warblers also. because many birds stopped in the area for a while because their was still a lot of snow north of us. This year everything has pretty much thawed so perhaps they just did not stop in this area this year. 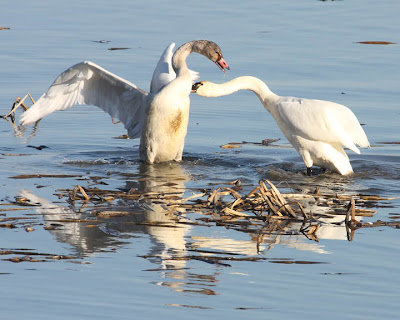 So it is a good thing that I still have some tundra swan pics that I took last fall that I have not yet posted. 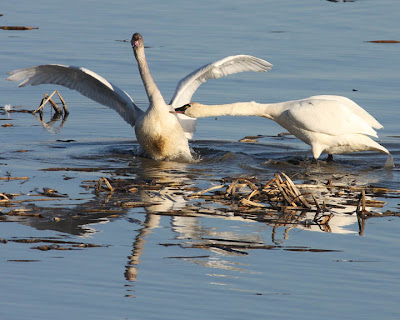 Tundra swans are the smaller of the two type that are found in North America. They nest up in the tundra areas of Alaska and Canada but in the fall many often gather on the Mississippi River in southern Minnesota, staging for their migration south. 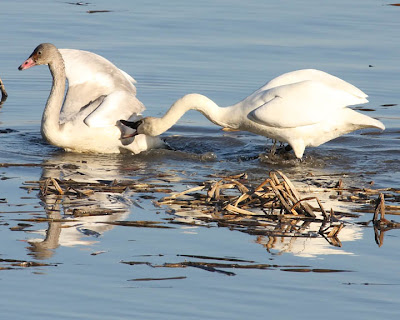 These pictures were taken near Brownsville, MN on November 11th. The swan with a pink bill is an immature bird. He probably hatched during the summer and has not yet fully matured. The adult in these pics was teaching the immature swan an important lesson and that lesson came from the end of the adults beak.

Posted by Ecobirder at 4:00 PM

You can really tell that the one swan was perturbed! I enjoyed this series! Have you seen any Loons yet?

You have some great photos in your archives! I'm so sorry the spring migration has not been what you'd hoped for though!

Awesome action shots. I so rarely catch birds in action or with their wings out. These are wonderful! Hopefully the birds are just arriving late. I hope they didn't just pass you over.

Awesome selection. I love the swans in action.

Congratulations on your blog! The DogTime.com team has been reading through hundreds of pet-related blogs and we've selected your blog to be a DogTime Blog Star. We invite you to join the DogTime Blog Network based on the following criteria:

Enthusiasm and love of for pets
Relevant and thorough pet content

Who is DogTime? DogTime Media is the largest online community of animal lovers with nearly 9.6 million unique visitors per month and over 275 member sites which include the best dog, cat, bird, fish, reptile and horse content from across the pet category. Please visit DogTime.com to learn more about our mission.

As a DogTime Blog Star more pet enthusiasts will see and read your blog and provide you with the opportunity to share your love of animals. Once you have joined the DogTime Blog Network there may be an opportunity for you to qualify to make advertising revenue.

Participation is simple, as we will use your existing RSS feed to feature your blog and posts. If you would like to participate, simply reply to this email with the URL of your RSS feed.

We will reply back with your own DogTime Blog Star badge to post on your blog site. For more details about the benefits of participating in the DogTime Blog Network please refer to our FAQs here: http://dogtime.com/dogtime-blog-network-faq.html. If you have additional questions please contact me directly.

Thanks, and we hope you Find Your Wag!

What a wonderful series of pictures! At first it looked like a courtship dance...how wrong one can be.

My Goodness so gorgeous, love the reflections as well.

Your swans are whispering " sweet nothings". What a sweet photo series.

hope you get some more migrants soon.

Wow ! I love these pictures.so beautiful and entertaining. Thanks for sharing the natural world with us.

they have some unique behavior.. btw, great shots!

LOL - oh my gosh - these photos are amazing! I love the parental interaction going on there!

They may be samller but they are still beautiful. Lovely photos.

The birds, reflections and light, all wonderful captures.