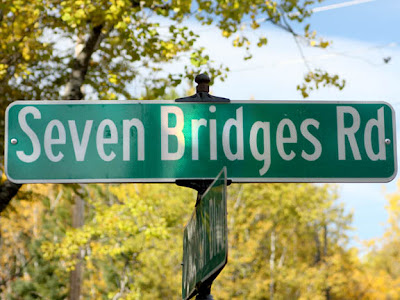 The Lake Superior port town of Duluth is known for both its beauty and its history and few places exemplify that more then 7 bridges road. 7 Bridges Road runs from Skyline Drive, just past Hawk Ridge, four miles to Occidental Boulevard. 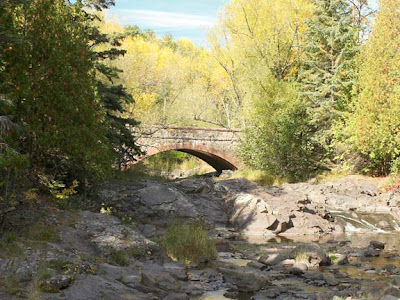 7 Bridges Road was originally called Snively's Road, named for Samuel Snively who owned a large farm on the bluff over looking Lake Superior. Snively loved the country side around his farm and decided that it would be a good location for a park drive. So he began to work on getting the necessary land and money and in 1900 Snively's Road opened to the public. 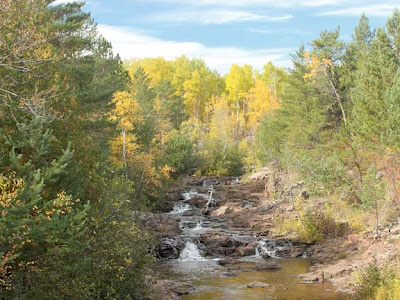 Snively designed the road with aesthetics in mind. The road runs through stands of birch and poplar winding gently down the hill towards the lake below. The lower portions of the road intertwine with Amity Creek criss crossing back and forth over the bubbling waters. 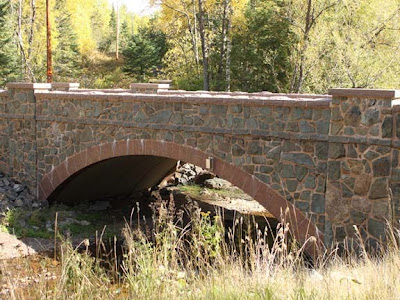 With in ten years of its opening most of the bridges on Snively's Road had fallen into ruin, due to neglect, making the road impassable. So in 1910 control of the road was transferred to Duluth's Park Commission. The Park Commission began a plan to renovate the road, replacing the ruined wooden bridges with sturdier arched bridges made of concrete and steel. To keep the aesthetic appeal of the road the bridges were faced with stone from the area with the coping and tops done in pink opal granite. The renovations were completed in 1912 and the road reopened with a new name Amity Parkway. 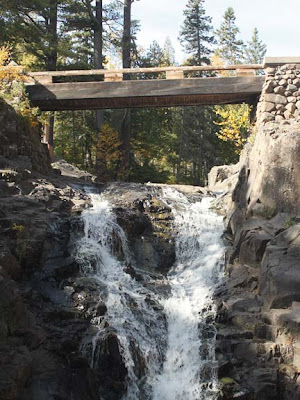 In the 1930's Snively again went to work on Amity Parkway, this time as mayor of Duluth. With his farm no longer standing, it was destroyed by a forest fire back in 1918, Snively finished his road by extending it to connect up to Skyline Drive near Hawk Ridge. Two of the nine bridges were no longer used, due to this change in the road, and fell into disrepair leaving only 7 bridges, which is how the road got its name.
Today 7 Bridges Road is considered something of a landmark in Duluth. Locals as well as tourists travel down it by car, bike, horse, or foot enjoying the same beauty that Samuel Snively witnessed back in the late 1800's.

"Seven Bridges Road" - isn't that a song?
Very beautiful and wonderful that it can be preserved like this. (And no disrespect to Mr. Snively, but "Seven Bridges" is a prettier name!)
Three Rivers Daily Photo

What a gorgeous location - The bridge and falls you have pictured here are fantastic!

Thanks for the history of the 7 Bridges Road. I have not been to Duluth - yet. These are beautiful. I'll bet they are covered with snow right now. Thanks for sharing.

What a terrific post for the day! Your photos are marvelous as always and I love all the history of the area! Have a great week!

What a wonderful place. I love bridges so I find this especially appealing.

It looks like a lovely drive. Twelve Bridges road provides access to my community but I have no idea how it got its name as there are no bridges evident.

What a great place! I would love to ride down that road...

Love that bridge shot! What an enchanting place.

Oh waht an exquisite place!!! Lovely shots - love the bridge and teh eraodsign with the yello leaves in the distance - perfect!!!!
Gena @ thinking aloud
ps. my post is up too!

Sorry ... take 2 :
Oh what an exquisite place!!! Lovely shots - love the bridge and the roadsign with the yellow leaves in the distance - perfect!!!!
Gena @ thinking aloud
ps. my post is up too!

Beautiful place, we are longing for blue skies and green trees here!

Great post and photos! I love bridges and the history behind them.

What a beautiful place and photos!