The Gray Catbird Often Heard but not Seen 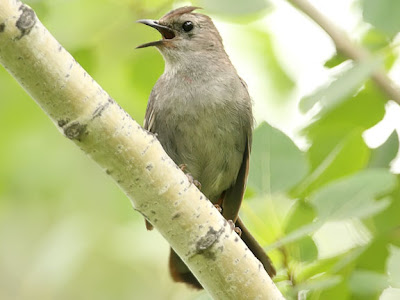 The gray catbird is one of those birds that is often difficult to see but not so difficult to hear. These birds spend most of their life in the tangled underbrush where you typically only see flashes of movement as they flutter between branches. There they hunt insects on the bushes and on the ground as well as eating berries when they find them. 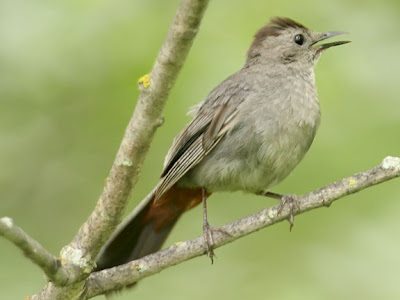 They are a member of the mimid family, which also includes mocking birds and thrashers, so they are able to mimic other birds calls, often combining several mimicked calls to create a call of their own. The males are typically the ones that use these vocal abilities, usually to advertise their territory and warn other males away. Their territory usually consists of brushy areas with plenty of under growth in the eastern portions of North America. During the winter they migrate south down into Central America and the northern tip of South America. This one was photographed in Hyland Park near the Richardson Nature Center.

Nice captures of him singing.

He is very cool looking! Thanks for the share and have a great weekend, be safe~

Gorgeous series of portraits and commentary on this elusive bird. I love all your photos and the fact that you are a fellow-St. Paulite! Wish I shared your talent and technical ability as well!

Fantastic captures of this little bird.

You've explained why I never see them. They are cute little things.
http://meeyauw.blogspot.com/2010/07/camera-critters-117-tractor-chicken.html

The humming birds, looks lovely. What you think he sings?