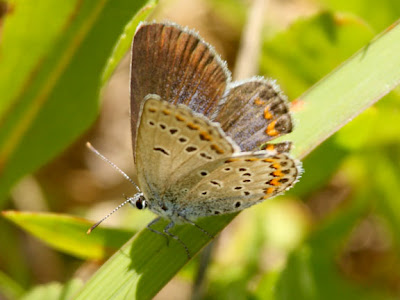 Usually when people think of endangered species they think of big animals like elephants, gorillas, tigers, leopards, pandas and the like. Most of these animals are endangered because they require a lot of habitat to survive and as man has expanded that habitat has shrunk. However not all endangered species are large. Meet the Karner Melissa blue butterfly. This small butterfly, it has a wingspan of only about an inch, was added to the U.S. Federal Endangered Species list back in 1992 because it too s suffering from habitat loss. 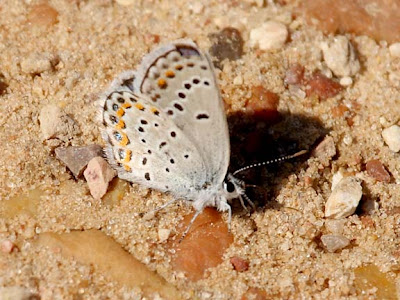 The Karner blue is a subspecies of the Melissa Blue which is found in the great lakes region. Unlike the other Melissa blue, the larva or caterpillar of the Karner Melissa Blue will only eat the leaves of the wild lupine plant. Unfortunately the amount of wild lupine growing around the Great Lakes has been decreasing and consequently so has Karner blue population. Wild lupine grows in sandy soil in open spaces. Much of this space has been taken over by man for cultivation or urban sprawl. Other suitable habitat, that is not directly destroyed by people, often becomes quickly over grown. With out natural disturbances, such as fire, forests over run the fields making the habitat unsuitable for the lupine to grow. Since it is on the Endangered Species list the DNR in most of the Great Lakes States have begun to manage land to make it more Karner friendly. This is especially true in Wisconsin where the majority of the Karner population resides. I photographed these Karners at Necedah NWR in central Wisconsin.

Thanks for the reminder to think of the tinier creatures! And great pics of such a tiny creature!

What a lovely, delicate creature. Such a shame it is endangered.

Such a pretty wee thing. - looks like its found an advocate :)

It was so lucky that you were able to photograph this! I think we all don't know that much about the specific name and info on many butterflies. Your post is very informative, thanks for letting us know!

So beautifully delicate. So sad it is endangered. You've captured some beautiful shots.

The little critters are important too! Good catch.

I had no idea, they are so lovely too~

this is my patch said...

Stunning photos. Reading this is so interesting. This endangered butterfly looks very much like our Common Blue, which is as it says common in England. I blogged about it a few posts back.

There seems to be an abudance of butterflies this year, or I'm just noticing more. Lovely shots