A Day in the Sax Zim Bog 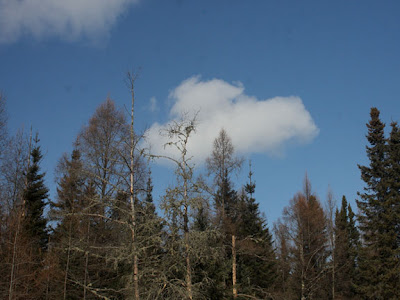 For the past month I have been tyring to get back up to the Sax Zim Bog area to take some pics. I usually try and get up there a couple of times each winter because it is one of the best places around to see some of the species that usually live up in the boreal forests of Canada. I made my first trip up in January for the Brrrrdathon but because of weather and schedule I was not able to make it back up until last week. Since I had a vacation day that I had to burn I decided to take off last Thursday and head north. 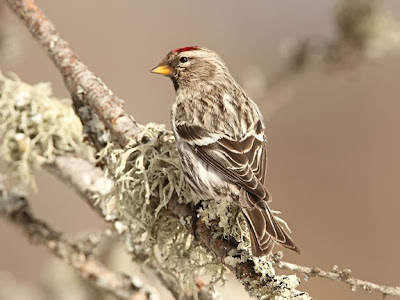 The weather on Thursday turned out to be quite nice. Except for some clouds around noon, the skies were pretty clear with temps up into the 20s. My first stop when I arrived was to the feeding station on Admiral Ave. I have always found this to be a great location for finding many of the wintering passerines. On this trip the feeders were dominated number wise by common redpoll. When I was up in January the only place that I found redpolls was at some of the feeders in the Meadowlands but on this trip they seemed to be everywhere. A couple of rare hoary redpolls have also been reported but I did not see any redpoll that appeared like it might be a hoary. 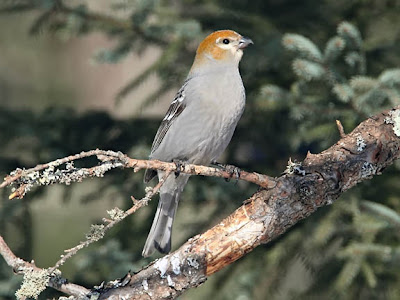 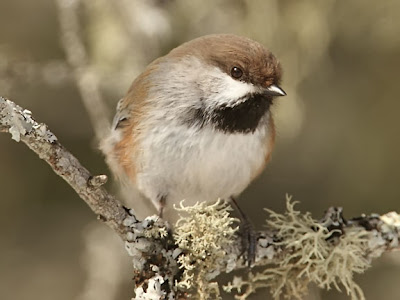 There were still a couple of boreal chickadees hanging around the Admiral feeder. They would come in and feed for a little bit and then disappear back into the bog. Forty five minutes to an hour later they would fly back in to the feeders, eat and then disappear again. While I was there I pointed them out to several other people who were looking for them because they were a life bird. 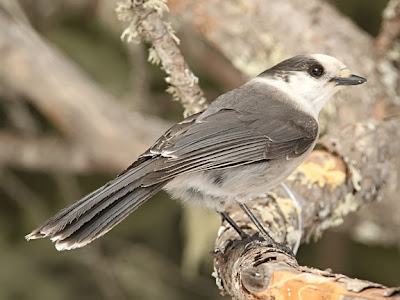 There were also a lot of gray jays at both the Admiral feeders and the feeding station on Arkola. Gray jays are very clever birds and not very afraid of people. On a couple of occasions I was afraid that one of them would fly though my open car window at Arkola. 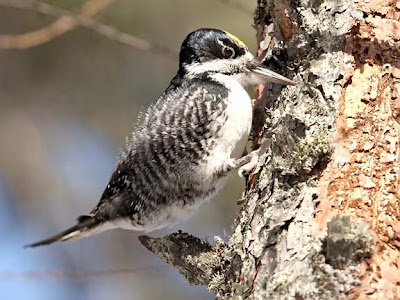 After the two and a half hour drive and spending a couple hours in the car at the feeders I decided it would be good to get out and stretch my legs. So I put on my boots and headed off in to the woods off of McDavitt Road. This is usually a good place to find black-backed and three-toed woodpeckers. As I walked into the woods I could see signs that there were woodpeckers in the area. Black-backed and three-toed woodpeckers typically peel the bark off of the trees instead of boring holes in the wood like most other woodpeckers do. So I listened for their distinctive peeling sound and found a male bird at work deep in the woods. 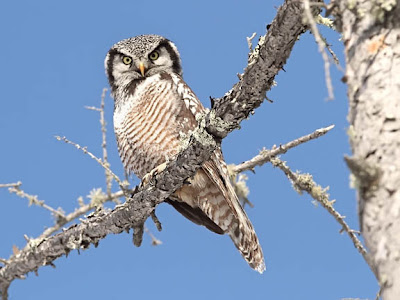 It was a lot of work walking through the deep woods and thigh high snow to get the woodpecker pics so I decided to walk along a path for a while. This was fortunate because a little ways down the path I came across a northern hawk owl. Northern hawk owls are one of the few owls that are most active during the day, diurnal. The owl was perched over an area that had recently been used for logging and was probably hunting rodents that lived in the remaining wood piles. Later on I looked for great gray owls in the same area, I saw two on McDavitt in January, but on this trip I did not have any luck with great grays. This might have been because I did not want to stick around too late since I still had a two and a half hour drive to get home.

Such beautiful birds and your photos are superb as always! It's wonderful to be able to see so much detail through your pictures! I love it! Hope you have a great week!

Excellent photos! What a great day for a birdwatcher. I love the grey Jay.

Thigh high snow or not, your passion for bird watching and photography are clear. What a wonderful array of feathered creatures you found! The gray jay is something I have not heard of until now. Even if not blue or red, it is very pretty, indeed. Thanks for sharing your forest walk.

That owl is just gorgeous!

Once again you do a stellar job of shooting great images and educating us as well! I especially love the hawk owl image.... a real winner!

A good day in your world. I keep hearing about the wonders of Sax-Zim, and am happy to get another glimpse of it, however vicariously.

Can you owl come and catch the mice that are strating to come to my house as winter approaches? I saw a mouse last night.

Beautiful photos of the birds Canada graciously shares with her southern neighbor, a bog in Minnesota. LOL
Seriously, they're super, and I'm sure we all appreciate your dedication to birding because we get to see the wonderful photos you slogged through thigh-high snow to see.
-- K

Fabulous pictures. That owl is stunning!

Publicity ;o) Every Friday (and the Weekend), The Challenge "Walk In The Street Photography"