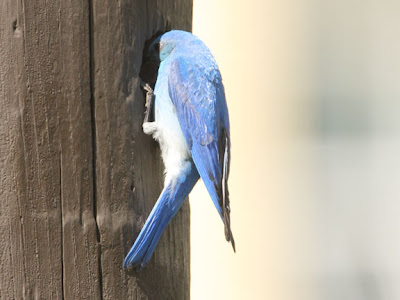 The mountain bluebird is one of three species of bluebirds found in North America. Its range is in the Rocky Mountain Region from as far north as Alaska, during the summer, down to Central America. Much of this range overlaps with the range of the western bluebird. Mountain bluebirds and western bluebirds compete for territories. On rare occasions mountain bluebirds have been spotted in Minnesota during migration or in the winter but the only time that we have had the chance to photograph them is when we take a trip to Yellowstone National Park. 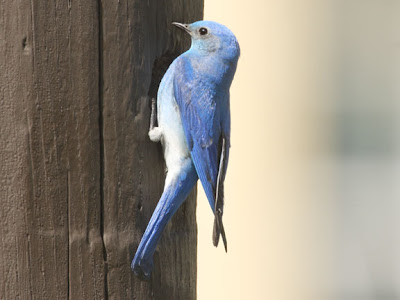 Like the other bluebirds the mountain bluebird is a cavity nester. The nest is built by the female only. The male, as seen here, will often go through the motions of assisting but will not actually help in nest building. The nest is made up of grass lined with fine grass, feathers, or other soft material. The clutch consists of 4 to 8 pale blue eggs.