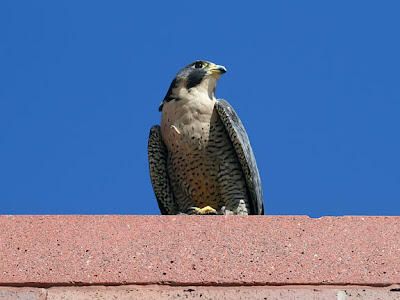 Juneau is one of three female peregrine falcons that we have in the education department at The Raptor Center. Juneau was discovered walking along the shore of Lake Erie near Point Mouilee, MI with an injured wing in September of 1998. When she arrived at The Raptor Center several days later it was determined that she had been illegally shot in her right shoulder. The TRC vets did all that they could but the damage to her shoulder was irreparable. Juneau can fly for a short distance but could not survive on her own out in the wild. Juneau is a great part of our education department. She was the second peregrine falcon that I learned to handle and has been one of the most common birds that I work with at TRC. That is why I was excited to use her in the 2012 TRC calendar. The picture above can be found representing the month of April. It was shot at the Gortner Parking Facility on the U of M St Paul Campus.

I think that the 2012 Raptor Center calendar is even better then the 2011 was. I photographed and put together both calendars so if you enjoy my photographs on the blog then here is your chance to have some print copies to own. The calendar is available online for $20. This is a bit more expensive then calenders you can buy at the store but please remember that part of the money from the calendar helps to feed and care for injured raptors.

You can order your calendar here.

How many nice picture you've taken here at your blog: 0) This one - great and powerful shot :0)

So pretty bird and a beautiful background of the blue sky. What he is looking there?

impressive shot!
i love your blog/photography!