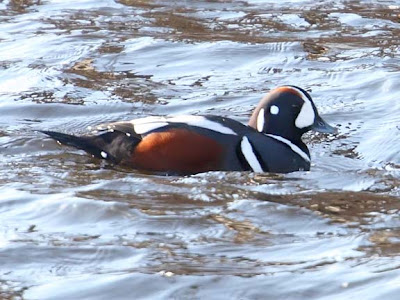 The harlequin is a duck of the far north. They breed in quick moving rivers and streams in places like Alaska, northern Canada, Iceland, Greenland and western Russia. They are named after Harlequin in Commedia del'arte, a character that was typically very colorfully dressed. 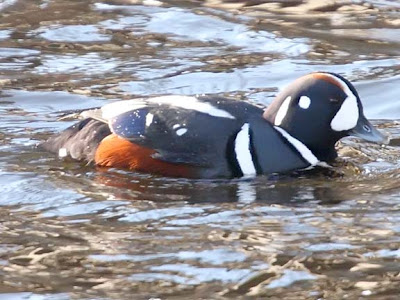 During the winter they typically migrate to the coastal seas. In North America most of the eastern population winters in the coastal waters of Maine. For about three years we had this male harlequin who came down and wintered in the open waters of the Mississippi River. Harlequins are diving ducks that eat fish, crustaceans and aquatic insects. So he spent his winter days diving for fish while many people where able to get a look at a bird that they had never seen before.

We have all sorts of ducks around here, but must admit to not ever seeing one of these. I'll keep a watch out though.

Gosh what a beautiful duck!

I love his hood and mask. He's Handsome.

Cool duck. All we have are mallards on our lake. Blessings, Debbie

They look like they are wearing permanent formal wear! Very stylish indeed!

Great pictures! It certainly is a very ornately colored duck.

Aren't they beautiful? I thought I saw this breed of duck once at the Arboretum. You mentioned they're from up north so now I'm not too sure. The one I saw had more orange in it.

found your blog today via ABCWednesday and am so glad to have done so.. My nine year old son is a budding ornithologist - he picked up this interest all by himself a few months ago and now he is slowly turning into a bird encyclopedia! will show him this..

and am following you now so will not miss new posts..

A nice shot of a very cool duck I have still never seen!