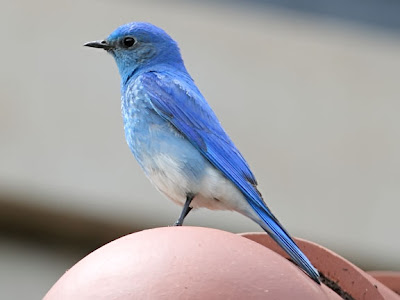 The mountain bluebird is found in the western half of North America. They breed from Alaska through Canada and the Rocky Mountain region of the United States. They winter in the southwestern United States, Mexico, and parts of Central America. Much of their range overlaps with the western bluebird. Mountain bluebirds and western bluebirds compete for nesting sites and will often defend their territories from one and other.

Posted by Ecobirder at 4:46 AM

Another awesome shot ~ You do great photography ~ thanks, namaste, Carol (Magical Monday Meme)

Nice bluebird. I think the Mountain ones ae perhaps the prettiest.

So pretty - and sooo blue!

Those are beautiful Birds. I haven't see any of them around here although we have the Western Bluebird which I love. Helen

a beautiful bird a fantastic picture

My husband has photos of the Bluebird but I have never seen them...such a pretty color and nice shot ecobirder. I shared some banding photos today.

A friend and i were walking in Minneapolis last Sunday and we believe we spotted this bird near the Mississippi river. Which is rare for Minnesota I believe. It was Oh So Beautiful!