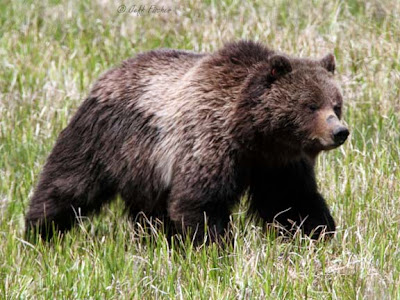 The grizzly bear is the largest predator in North America. Males can get up to 1200 lbs or more. They are omnivores eating a diet of fruits, berries, nuts, seeds, grasses, rodents, fish and larger mammals. During the fall they go into hyperphagia in preparation for hibernation. During hypephagia the bear do little else other then eat and sleep. An adult bear can put on up to 400 extra pounds during this time, which is important because they do not eat during the 5 - 7 months that they hibernate. 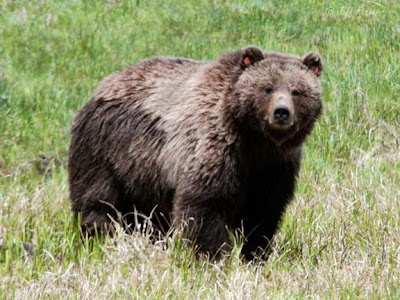 Grizzly bears are related to brown bears or Europe and Asia. It is believed that they traveled to North America across the Bearing Strait around 50,000 years ago. When European settlers came to North America Grizzly bears were found through out much of the western half of the continent. Unfortunately because of hunting and habitat loss the grizzly bear has been extirpated from over half of it's original range. The largest concentration of grizzly bears is in Alaska where they estimate the population at around 30,000 bears. The population in Canada is estimated at between 15,000 to 20,000. In the continental U.S. the population is only about 1500. Most of the bears in the lower 48 states of the U.S. live in Montana, Wyoming, and Idaho. With the majority of them living in Yellowstone National Park, where we photographed these, and the Grand Tetons. 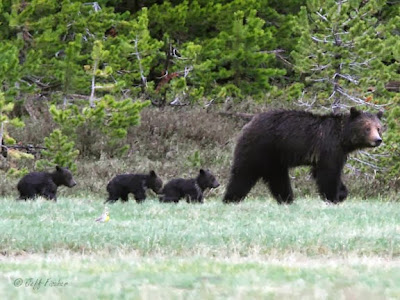 Part of the problem with the grizzly bear population is that they have a low reproductive rate. Grizzly bears do not reach sexual maturity until they are at least five years old. Mating occurs in the summer but the embryo goes into stasis until the female is in hibernation. If the female is not in good health and sufficient weight her system will abort the pregnancy. If she is healthy she will have the one to four cubs in the den while she sleeps. The cubs will stay with their mother for a couple of years, hibernating with her over two winters. During this time the main predator that the cubs need to fear is a male grizzly. Males will kill the cubs hoping to put the female in estrus so that they can mate with her. After a couple of years she will chase her offspring away and the cubs will be on their own. She may mate again that year if a male finds her while she is in estrus but grizzly bears are solitary and have large territories so it is possible that she may not find a mate for a year or two.

Wonderfully informative post about Grizzlies and excellent photography ~ thanks, carol ^_^

Love the shots and thanks for the information.

Great shots of these magnificent bears.