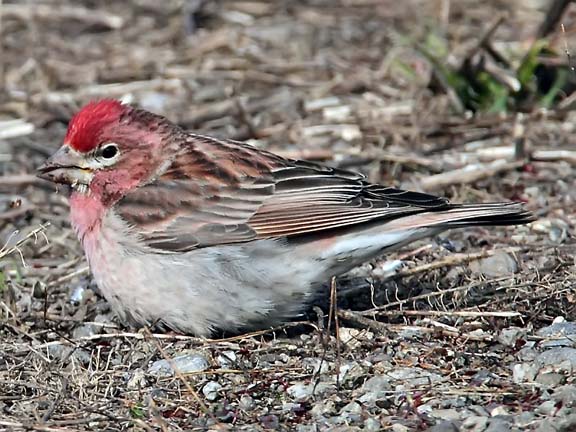 On one of our trips to Yellowstone I had the opportunity to photograph a few Cassin's finch. I almost missed out because at first I thought they were house finch. House finch are pretty common through out most of the United States. But house finch have more streaking on the belly which this bird obviously does not have. Next I was thinking purple finch but Yellowstone would be a bit out of their range. It also has that distinctive red crown, a by product of the carotenoid pigments that are found in the colorful berries that they like to eat. The purple finch has a more uniform red color on the head. I finally identified the birds as a Cassin's finch, which were named after famous ornithologist John Cassin, who first recorded them in the 1850's while part of the Pacific Railroad Survey. Cassin's finch breed in the western third of the US and winter in the Pacific southwest and Mexico. A gorgeous bird and shot

House finches are indeed quit commmon, overhere in The Netherlands to, but this Cassins finch, i've never seen before.

How lucky you were to capture it, nice choice for entry!

Now you have me wondering if I have some Cassin's Finches in my yard and are thinking they are all House Finches! Some have seemed to me to have a brighter red head than others, but I'm not sure about the streaking on the belly. I'm going to try to be more observant.

We went out looking for eagles today and found a few. - Margy

Wish we could change hair color by eating certain berries! This a beautiful finch!

You are very discerning! I wouldn't have made the distinction.

So wonderful to pop in and see your photos again ecobirder Interesting info also.