When we go in the fall we typically stay down in Jackson, WY and spend most of our time down in the Tetons photographing moose. When we go in the spring we stay up in West Yellowstone and spend most of our time on the northern loop of Yellowstone. Unfortunately this year the weather was not as good as it has been on past trips so we did not see as much as we usually have.

We did see quite a bit of waterfowl this year. We spotted these lesser scaup swimming in the Bridge Bay of Lake Yellowstone. This picture was one of the few pictures that we were able to take on Tuesday. It snowed pretty much every day that we were at the park but on Tuesday it snowed all day long. This made the visibility pretty poor which made it very difficult to take pictures. 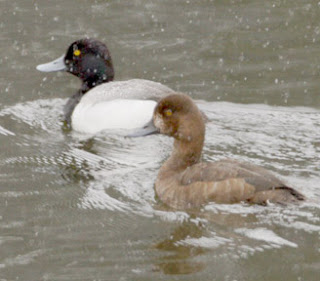 Thursday we had a bit better weather. It still cloudy that day but it only snowed off and on. While driving through the park we noticed a pair of common merganser swimming in the Gibbon River. I was pretty excited because grebes, loons and mergansers are some of my favorite non-raptors. So I stopped to take some pictures. As I moved up to get even with them to take their picture the pair kept swimming upstream. The current was pretty quick so they were not able to swim very fast. Each time I would get even with them I would stop to shoot and they would move further up stream. This happened a few times until I decided to get smart and wait to stop until I got a head of them. As usual it was the birds that out smarted me. As soon as I got further upstream then they were, they turned around and shot down stream flying quickly away on the current. I got a few more shots as I walked back to the car but I decided that if they were that determined not to have their picture taken that it would be better to be satisfied with the pictures that I had rather then stress the birds out any more. 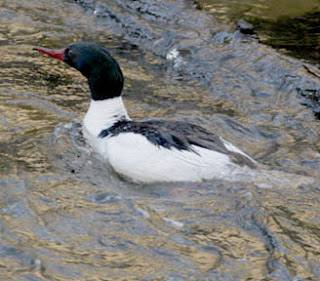 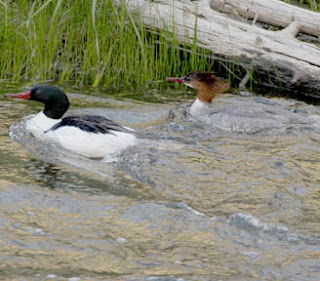 We spotted this barrow's goldeneye on Floating Island Lake. 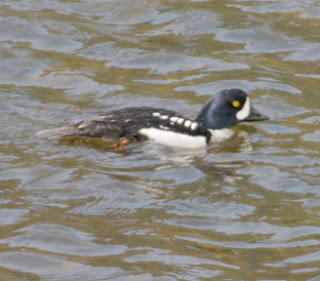 This trumpeter swan was also photographed at Floating Island Lake. He seemed to have problems with the neighbors. A couple of times he chased canadian geese around the lake shore. 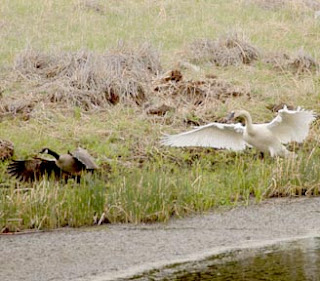 We spotted a group of american white pelicans swimming in the Yellowstone River. This was about the only time on Tuesday that it was not snowing. The break lasted long enough for me to get a couple of shots. 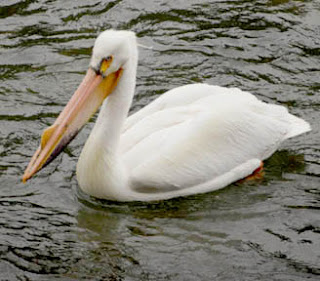 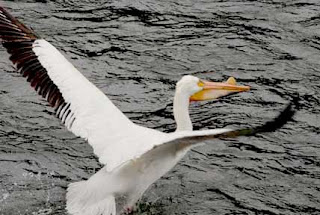 I will post more bird pics as well as some of the other pics that we took in the next few posts.
Posted by Ecobirder at 5:07 PM