After photographing the eagles hunting down on the Mississippi in Prescott, WI for a couple of hours I finally headed over to Carpenter Nature Center to watch and photograph some bird banding. By this time the sky had clouded up so I could not really get any good shots outside at the feeders. So I stayed inside the new visitors center and talked with the banders for a while. I always like talking with people who have been birding longer then I have it is usually very interesting hearing their stories and I learn a lot. I also got to share a couple of my birding stories and some of the pics that were still on my flash card.The banding was fairly light while I was there. I was told that it had been brisk when they first began but during the two hours that I was there they only brought in about 6 to 8 birds. Most of the birds that day were juncos or tree sparrow and were birds that had already been banded in the past. The bird in the picture below has been caught 10 times in about 3 years. 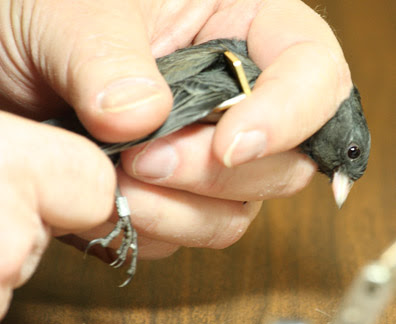 When they catch a bird that has already been banded they ID it, by the leg band, and then take some other information. The Banding ended at noon but my birding was not quite finished for the morning. On my way home I spotted an eagle on a tree very near to where I had photographed the red-shouldered hawk the day before. 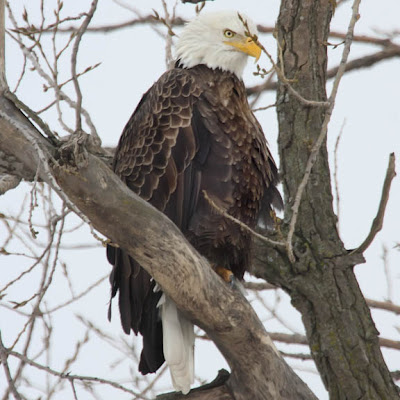 We were not very far from the river but I was a little surprised to find this bird perched in a tree over looking the road.
Posted by Ecobirder at 11:55 PM