Yesterday I made a bit of an error when responding to people who e-mailed me about the eagle pics. I mistakenly told them that I would be posting pictures that I took of a great gray owls nest, when what I meant was that I took pictures of a great horned owls nest. I am quite aware of the differences between the two types of birds but unfortunately I frequently interchange the names when I am talking about great horned owls. Since I do not like to disappoint I have dug up a couple of great gray owl pics that I took during the 2004-2005 eruption. 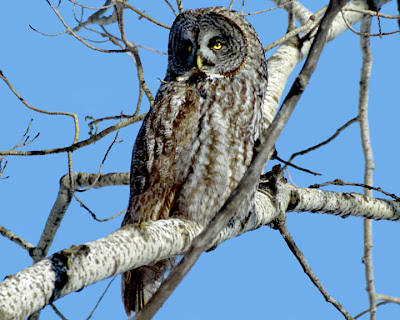 Approximately every 4 to 5 years Minnesota sees an eruption of great gray owls that visit the northern part of the state. It is believed that these eruptions occur when the owl populations in Canada are high while the vole populations are low; voles look similar to field mice and the main diet of great gray owls. Typically these eruptions consist hundreds of younger birds that do not have their own hunting territory so when times get lean they follow the food source south. 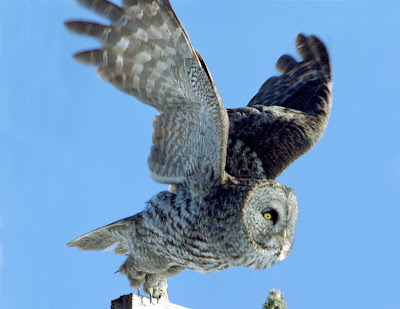 The eruption of 2004-2005 was special though. Typical eruptions consist of a few hundred birds that migrate into the extreme northeast part of the state. The record number of birds counted in an eruption, prior to 2004-2005 was around 500. In 2004-2005 the number of great gray owls counted was over 5000. There was also a significant increase in the number of northern hawk owls and boreal owls that winter, but not quite to the extent of the great grays.

Unfortunately, it does not appear to be an eruption year for the inaugural Sax Zim Bog Festival of Birds which is taking place in a couple of weeks. It should be a great convention though. It appears as though they have some predictable northern hawk owls that we should see and some great gray and snowy owls have been spotted in the area so we may get a view of one of those also. Plus there are other winter species that we will hopefully see like the black backed woodpecker, boreal chickadees and others. If we have an eruption year next year then this convention will easily be the highlight of the year so I am already planning ahead.

Posted by Ecobirder at 5:27 AM