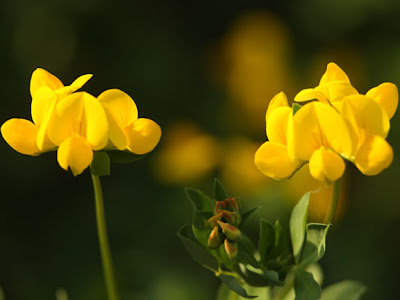 Another fairly common wildflower that I find around home is birds-foot trefoil. This non-native species was originally found in parts of Europe, Asia, and northern Africa but has since spread to most of North America as well as Australia. It is a low growing perennial that is a member of the pea family and often found growing in sandy soil. It is sometimes grown in pastures as a foraging plant for livestock. 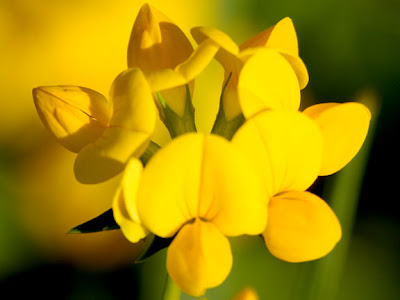 Bird's-foot trefoil has five leaves but two of them are difficult to see because they are lower then the other three. The three upper leaves resemble the trefoil symbol, three interlocking rings, which is why it is a trefoil. Later in the year the flowers will develop into a pod, like other members of the pea family, which hang down from the stalk. This is how it got the bird's-foot potion of its name.

Posted by Ecobirder at 5:36 PM

Love the lighting in those shots. Complements the flowers beautifully!

Breathtaking shots of that little flower. What an amazing shade of yellow. It's so rich!

I love your slide bar on the right. I'll have to try that ...

Very beautiful photos. Thanks, too, for the information.

Wishing you a great week.

i find this flower difficult to photograph, these pics are lovely.
Spirithelpers

Another great post, thank you for sharing it with Today's Flowers.

I agree with Tammie Lee - these flowers are beyond my ability to capture, so I am even more impressed with yours!!