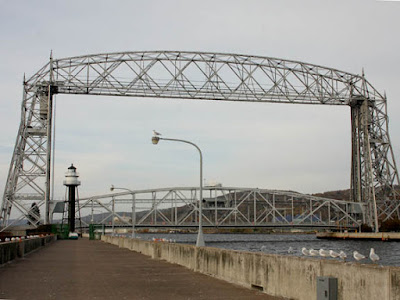 On my way to bird out on Park Point in Duluth I get the pleasure of riding across Duluth Aerial Lift Bridge. This bridge is listed in the National Register of Historic Places and it is the center of the Duluth Harbor and tourist area. 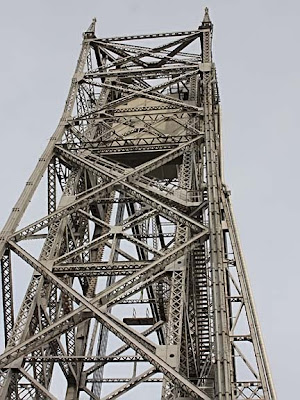 Duluth sits on the tip of Lake Superior near the mouth of the St Louis River. Through out its history it has been a major port in the Great Lakes. Back in the late 1800s a channel was dug into the long sand bar that is Minnesota Point to allow small boat traffic closer to the city. 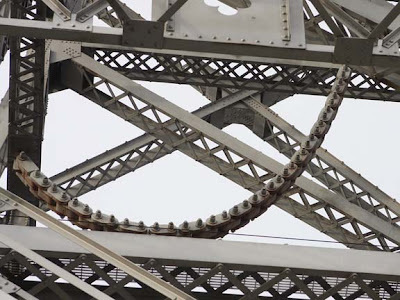 However people began to settle on Minnesota Point and they needed a way for people to cross the channel. So back in 1905 they built the Aerial Ferry Bridge. This was one of only two bridges of this type that was built in the US. People, animals, wagons and later cars would load into a gondola which would ferry them across the channel suspended from a high span. 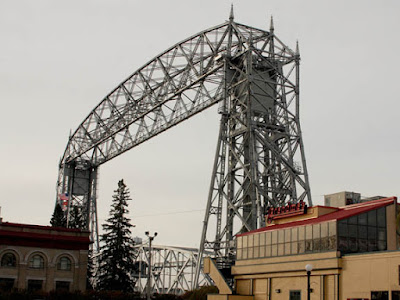 By the 1920s traffic to Minnesota Point had increased so much that the aerial ferry could not adequately handle the load so in 1929 they began a major bridge remodel. The gondola was removed and a steel mesh lifting platform was added. The top span had to be raised in order to lift the span high enough for larger ships to pass beneath and the support column on the sides were modified for the addition of the counter weights used to lift the span. The bridge is still used today and it is the only way to access Minnesota Point, except by water. Currently they are doing some work on the bridge with money provided by the American Recovery and Reinvestment Act. So at least they are doing some good with our tax money.

Wow - an amazing bridge -- does it still go up and down? Nice photos. I especially like the one of the gigantic "bicycle chain".

Great pictures. I just love bridges that lift or turn.

That is amazing! And what terrific pictures!! Love the history of the bridge! Great post! Thanks!

Great photos, especially the close-ups of the girder work. I really like some of these old structures, and they make great photographic subjects (I often photograph buildings and bridges of varying ages). It's great to see they are repairing and maintaining the bridge so it can remain in use.