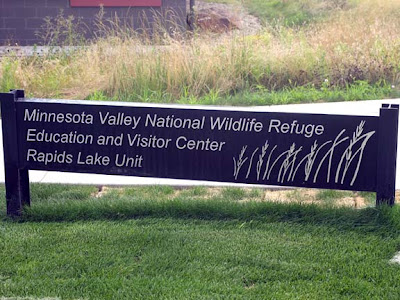 I have visited the Minnesota Valley National Wildlife Refuge often over the past several years, however the refuge is broken up into several different units stretching southwest along the Minnesota River. Since I spend most of my time at the Long Meadow portion of the refuge, which includes the refuge headquarters, Bass Ponds, and Old Cedar Avenue Bridge, I decided to explore some of the other units this summer. 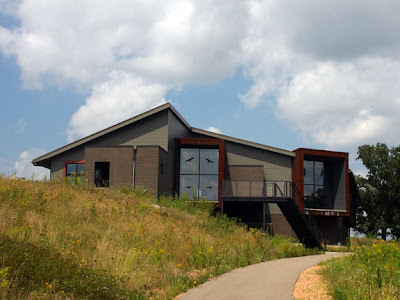 So on August 8th I headed down to the Rapids Lake unit of the Minnesota Valley NWR. The Rapids Lake unit is the newest edition to the refuge and it is located in Carver County, which is south of the Twin Cities. It is the only unit, other then Long Meadow, that has an interpretive visitors center, which you can see from the photo above has an impressive view. 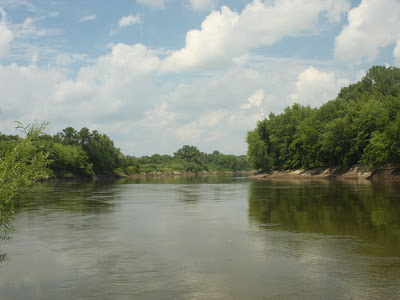 The Rapids Lake unit consists of 1500 acres on the west bank of the Minnesota River. It has a variety of habitats including oak savanna, goat prairie bluffs, bottomland forests and restored wetlands. There are also three lakes in the unit, Long Lake, Horseshoe Lake and Rapids Lake, for which the unit is named for. Across the Minnesota River, on the east bank, sits the Louisville Swamp unit. 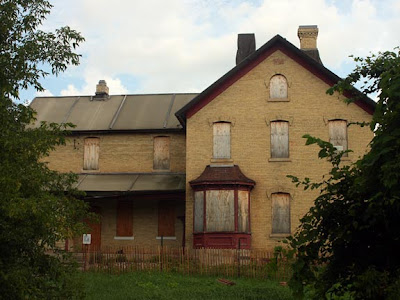 Much of this unit once belonged to the Gehl Family. The Gehls used the land to raise thousands of turkeys. Turkeys still roam the lands but now they are wild turkeys, all of the domestic birds were removed before they could bread with wild turkeys because the offspring would not be able to live on their own in the wild. The old Gehl farmhouse is just down the path from the visitors center. 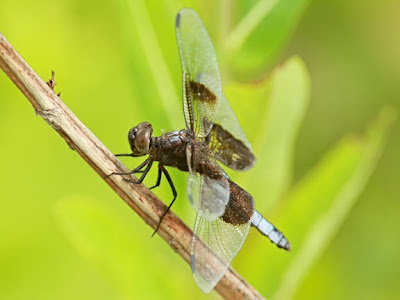 One of the main reasons that I choose to visit this unit was because Carver County is one of many counties that needs some serious surveying for Odonata, dragons and damsels. I have spent quite a bit of time this summer volunteering with the Minnesota Odonata Survey Project trying to survey every county. This has included traveling to every corner of the state, but I was surprised to find that Carver County, which is only about 45 minutes from home, had less then 10 types of odonates on their county list. 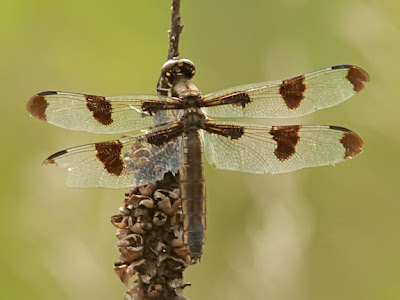 I found several new species to add to the list including the common whitetail and 12 spotted skimmer, pictured above respectively, and lance-tipped darner, green darner, widow skimmer, blue dasher, white-faced meadowhawk, autumn meadowhawk and common pondhawk. I also found several types of damselfly that had not yet been surveyed. 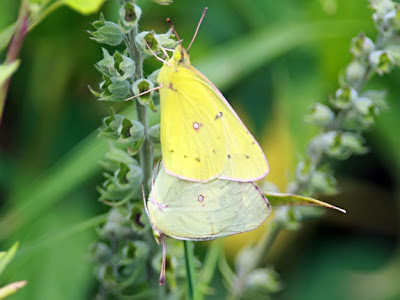 Besides dragonfly I also saw butterflies, like these mating common sulphur, belted kingfisher, herons and a couple of other types of birds. Unfortunately the heat that day was pretty unbearable, with a 110 degree heat index, so I did not stay very long. I will need to make another trip back down, maybe during the fall bird migration.

Posted by Ecobirder at 3:48 AM

Terrific and informative post and fantastic photos as always! Always learn something when I visit and that's a good thing! Have a great week!

What a beautiful refuge. I enjoyed all of the photographs and loved the dragonflies you shot.

I have never come across a polka dotted dragonfly. Lovely shots.

Fabulous shots! Love the old farmhouse,though such a shame it's not in use anymore.

Lucky you get to survey some of the most beautiful places I've seen & get to see fascinating wildlife. Fantastic photos as usual. :0

Another good MN resource to put on the list. Thanks again for broadening my local horizons.

You bring our world in for a closer inspection - and it is exquisite! Thank you.