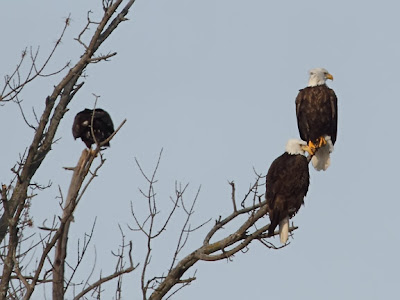 Each year as winter approaches most birds begin there annual migration south to their wintering grounds. The reason why most birds head south for the winter is not to escape the cold, that is why retirees head south for the winter, the reason why they make such a journey is basically just to find food. Consider flycatchers and warblers that primarily eat insects, when winter comes there are not so many insects so they head south to where there is still food. 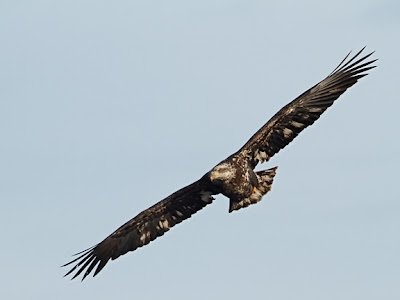 Bald eagles do what is often referred to as a partial migration. With over 7000 feathers they do not worry much about the cold, however it is very difficult to catch fish, their primary food source when all of the lakes and rivers are frozen. 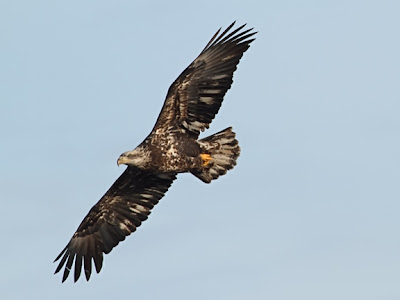 Since eagles are opportunistic feeders they also eat a lot of carrion. So some eagles may stay in areas where there is no open water source and survive mainly off of road kill, but the majority will head south until they find open water for fishing. Minnesota has a very healthy population of bald eagles, Alaska is the only state in the US that has more nesting pair, and so during the winter most of them congregate in the southern part of the state along the open waters of the Mississippi River. 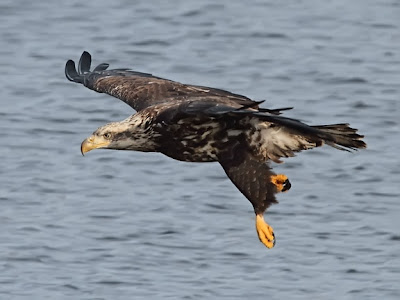 One spot where we usually find good numbers of bald eagles during the winter is at Colvill Park in Redwing, Minnesota. Colvill Park is a little city park that is located adjacent to the Mississippi River. Much of Colvill Park is what you would see in a typical city park, benches overlooking the river, a public swimming pool, a very nice children's playground, but during the winter the big attraction is the small wooded area to the north of the park. People come from all around to see the eagles perched on the trees or fishing in the river. An Excel Energy plant which is located just a few blocks up river helps to keep the river as well as the back channels from freezing up. 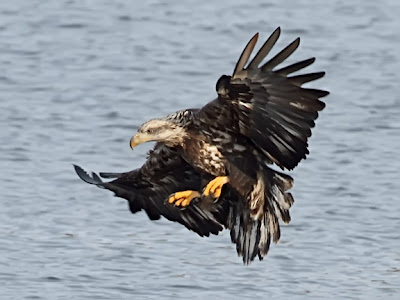 The eagle population at Colvill fluctuates depending on the weather. During years where we have a mild winter we often have a pretty large group wintering down around Redwing. During years where the winter is harsh, like this year has been, the eagles tend to go further south down into the Mississippi River National Fish and Wildlife Refuge, so only a few remain up in the Redwing area. Even when the eagles go further south they often begin to head back up to Redwing as winter begins to thaw. When I was down in Redwing last weekend I only saw a few eagles in the park. I expect that will change as the weather starts to warm up. I took the pictures for this post last year in January. Last year the winter was milder then this year and there were quite a few more eagles to photograph.

Wow! Such great images! They are amazing birds!

These photos are exquisite!

Fantastic! We have a healthy wintering population in the Skagit and Stillaguamish Valleys. I love to watch them.

They are so beautiful, so magnificent! And your photos are superb as always! Thanks for sharing them with us today! Have a great week!

Interesting and beautiful pics as always Eco. I must say we still had quite a few overwintering eagles here in Fillmore county, in spite of the awful weather. I really think they have been studying the turkey vultures in recent years and seem to be doing quite well without be able to fish here. Clean up crew I'd say. :)

Incredible images accompanying a most informative text. You know, I go south for the winter for both the weather and the food. There's some awesome Mexican food here in TX! Believe me, I eat my fill while I'm here!! ~karen

Wonderful eagle photos, especially that last one. My post this week includes a bald eagle in a very bad photo taken from a car on a freeway. There are a great many bald eagles around the south coast of British Columbia right now.
-- K

Bald Eagles at close range, what a treat. Tend just to see our Wedge Tailed E's high up in the sky.

I love my home, I live a block away from Colvill. First year I lived here I counted 80 eagles in the trees around my house.