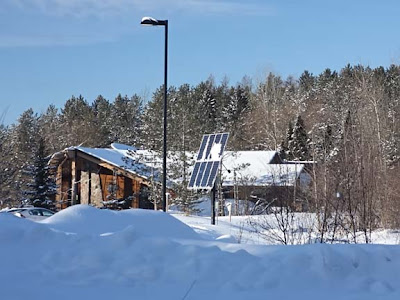 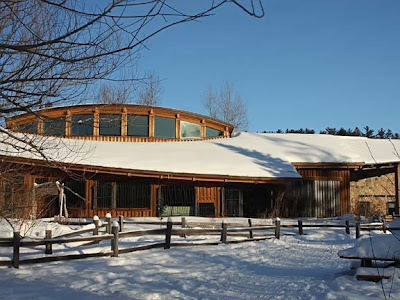 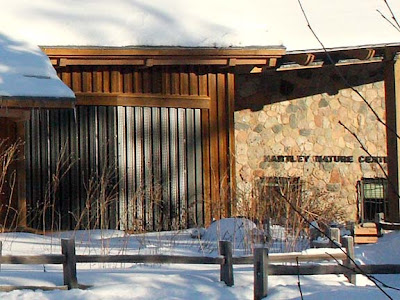 The building was built in an East-West orientation to maximize the the amount of the building that would be exposed to the southern sun. A portion of the south wall, pictured above, is a solar wall. This wall uses the sunlight to heat the air which is then taken in by the building ventilation system. 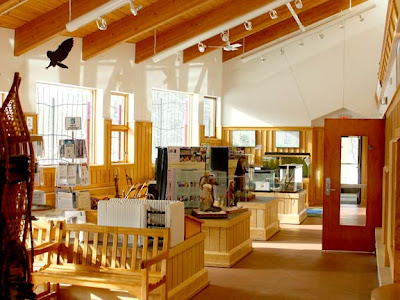 The building was also designed to provide the maximum amount of natural lighting. This minimizes the amount of lighting that needs to be generated by electricity. On the afternoon that I visited the only areas that I saw that had lights on were the restrooms. 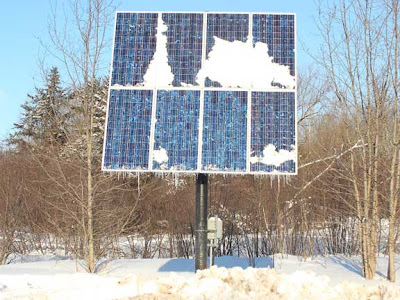 When electricity is needed much of it is generated through solar panels. The nature center has two solar arrays. There is a stationary array on the roof, which was covered with snow when I was there, and this tracking array which can turn to follow the sun through out the day. Any excess power that is generated flows back into the Duluth power grid, providing the nature center with energy credits and the area with more clean power.

That's one of the most visually appealing nature centers I've ever seen. Glad to see MN is into green building, a bonus!

A beautiful nature center it is! I do hope we see more of this type of green building in more states in the near future. Great post as always! Enjoy your week!!

I love that building. Nice how so much light comes in and what a lot of snow Brrr

Great post on the green nature Center. It would be ncie to see more buildings like this one.

This is great. I love to see ecologically sensitive buildings, and this one is a prime example. Geothermal heating and solar-generated electricity makes so much sense, I can't imagine why it isn't used more often. You just made my day!
-- K

I wish more buildings were constructed with such forethought.