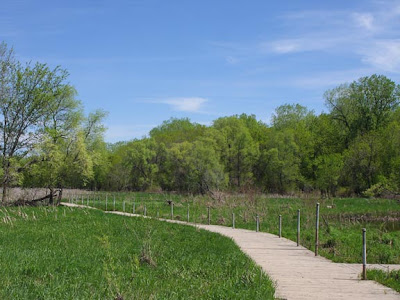 This May I have spent a lot of time photographing warblers. The late spring helped to hold off the trees from leafing out which gave me some spectacular views at warblers that stopped on their way migrating north. One of the places that has been good for spotting warblers in Crosby Farm Park. Usually I spend a lot of my time at Crosby around the boardwalk that leads through the wetlands. Last year I got some great shots of American toads calling at this location. 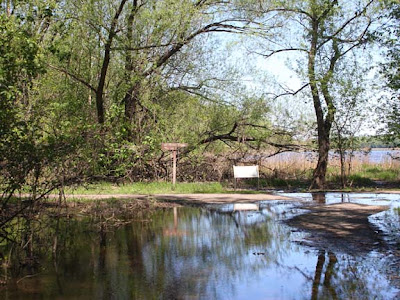 When looking for warblers however, trees are important habitat. So I decided to head out on the trail that follows the river on the south side of the wetlands. Many of the trails were still wet or full of mud due to the flooding of the Mississippi River. Fortunately we are near enough to the beginning of the Mississippi so our troubles were not as severe as they are currently experiencing down south. 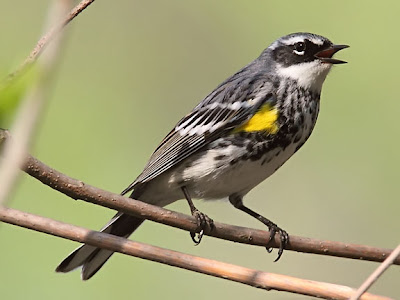 I found numerous warblers on my couple of visits to Crosby. The most common warbler that I saw was the yellow-rump warbler. Yellow-rumps are usually the first warblers that we see in the spring and the last that we see each fall because they do not migrate as far south as the other warblers. Because of the weather and lack of leaves it was not difficult to find the warblers the hard part of photographing them was separating the other warblers out from the yellow-rump, which were about 95% of the warblers that I saw. 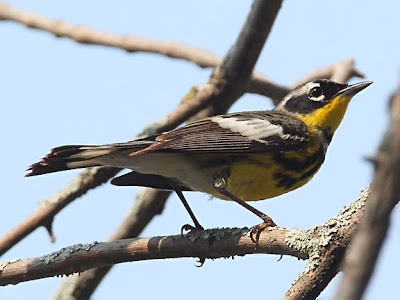 I saw many different types of warblers besides yellow-rumps such as Nashville and yellows. Both of these types are easy to catch your eye because of their bright yellow color but you have to be careful to look closely because sometimes you can get lucky and find one of the more fancy yellow warblers like the Magnolia warbler above. 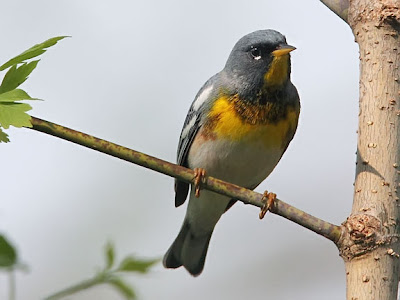 Northern parula are not as colorful as the magnolia but I was very happy to have the chance to photograph one. As you may know, if you are a frequent visitor to Ecobirder, I do not count a bird to my life list until I have an identifiable picture. I guess that means I can now add northern parula to my list. 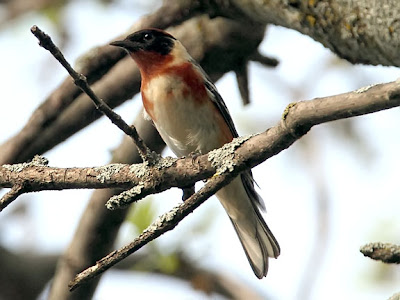 While I have photographed bay-breasted warblers before this picture that I took at Crosby turned out better then any that I have taken in the past. I was lucky on this occasion too because the skies clouded up, which made taking pictures pretty difficult, with in an hour of me arriving at the park. Right before the clouds took over the sky this bay breasted flashed a quick peak for the camera. Besides those pictured I also saw yellow warblers, American redstart, black and white, blackpoll, Blackburnian, Tenessee, and palm warblers.

Marvelous captures! I can almost hear them warbling!! Great post as always and a lovely look at your world!

Stunning photos!! I have always dreamed of taken such photos but I can´t. You are amazing.

I really think you'll enjoy this video of a pissed off snowy owl in Nunavut, Canada

Please consider posting a link on your blog to help this unique video receive more exposure!

I think the cloudy sky may have enhanced these portraits!

perfect catch!!!! Have a great weekdays ahead!!! Hope to see you around.

These are wonderful! You've made my day!
— K

I so love this post. This is my favorite nature walk in the Twin Cities. What a heyday of warblers you had!
As usual, lovely photography.

Wow what a wonderful collection of warblers. Just a great post.

The yellow-rumped warblers overwinter here in coastal Virginia and are quite comical. I've seen one defend the birdfeeder from others as if it were his whole domain. Most of the time he is unsuccessful and finally lets all the other warblers, finch, titmouse and nuthatch in.