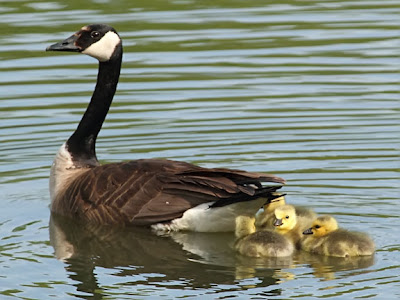 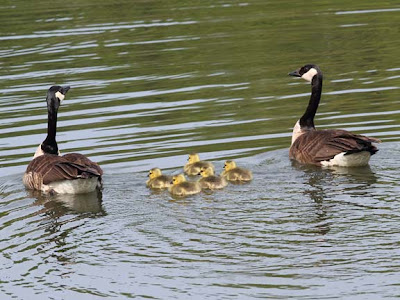 It may officially be summer but it does not seem a lot like summer here. The temperatures have been below average so far this June, although we had our first 100 plus day in the past five years earlier this month. We have are a bit above average in the rainfall department but we have had many days that have been cloudy and gray, making it difficult to take picture like the ones of the Canada goose family above. I took these photos in June 2010 at the Bass Ponds. The weather was quite a bit more cooperative in 2010 then it has been so far this year.

A nice family! The family that swims together stays together? ;-)

What a sweet photo... and good parents!

How lucky you were to get the whole family together for a portrait!

IT DOESN’T TAKE AN OCEAN

It doesn’t take an ocean
Or a mighty sea,
A simple little raindrop
Is enough for me!

I also like the jewels
Scattered in the grass
After summer thunderstorms
Soak the earth and pass.

There’s also perspiration
Clinging to a nose—
A sign of honest labor,
Or so I suppose!

Wonderful, most wonderful,
Are the seven seas,
But give me downy snowflakes
Clinging to the trees!

So these little fluff-balls are all grown up now? They look so tiny here. We see lots of geese fly overhead but seldom go down to the river where we might see goslings.
It is +24C here (75F) which, to me, is a nice outdoor temperature, but it should be a lot hotter for this area. We had a long, snowy winter, and a long, rainy spring, so there's no telling what summer will bring.
— K

It looks like they are being very good parents. The last photo is brilliant. Dave at photoviews