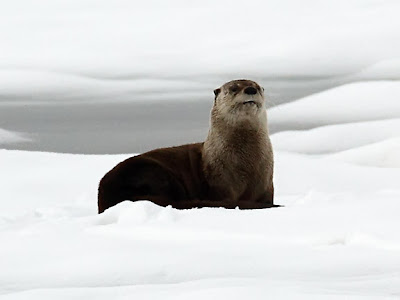 We started out Wednesday by heading back over to the Yellowstone Lake area by the Fishing Bridge. As we got to the lake, much of which was still frozen, we saw two small dark shapes out on the ice. We stopped to take a closer look and found that they were a pair of river otters. One otter, pictured above, seemed to be resting near the edge of the ice while the other was running around. 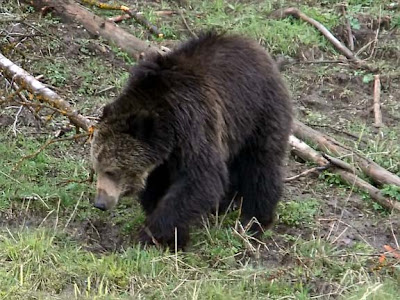 After the otters finally disappeared under the ice we headed out towards the east entrance. The road was still closed off due to danger of avalanche but we did find a couple of grizzly to photograph, one at Mary's Bay and another at Sedge Bay. Unfortunately we still were not able to find the grizzly sow and cub. 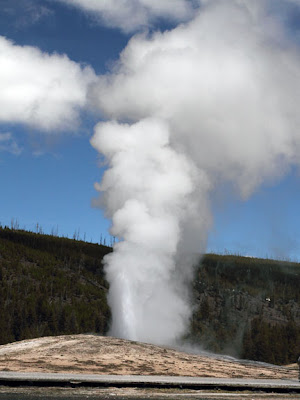 Since the sky was beginning to clear up we decided to head back around the southern end of the park so that we could get some pictures of Old Faithful erupting. We had tried a couple of days earlier but the weather that day made it difficult to get good shots. With nice blue skies the pics turned out much better. 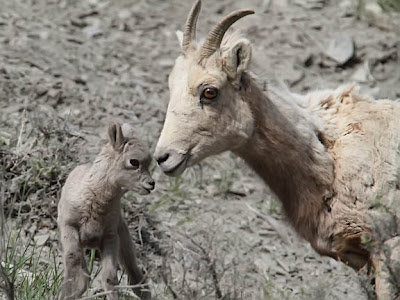 After Old Faithful we headed up to Mammoth and the north entrance to the park. We had hoped to get some more shots of the new born big horn lamb that we had seen a couple of days earlier but as we came around the corner we could not see the sheep on the cliff face where we had seen them earlier. We did see some cars pulled off a little way down the road so we headed that way to check it out. There on the hill not far from the road was the big horn ewe and lamb. Since they were much closer we were able to get a lot of good pics. It was amazing to see this little lamb scurry around on the rocks and cliffs at the ripe old age of two days. 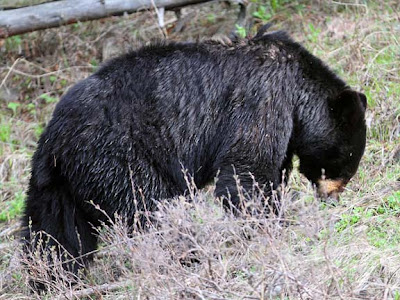 It was getting late so we decided to head back to our hotel in West Yellowstone. On the way we spotted two black bears in different areas. The first black bear was indeed black, above, but the second was a cinnamon black bear. Black bear is a species and can come in a variety of colors, although black is the most common. 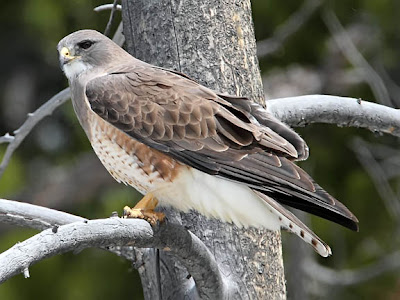 Thursday was our last day in the park. We were already quite happy with all of the great wildlife that we had seen and the photo opportunities that we had. So we decided for the finally day we would go all the way around the park, except the road between Tower and Canyon which was still closed due to snow, and just see whatever we would find. On the south loop near the Lake Area turn off a large bird flew across the road and perched in a tree close by. It turned out to be a Swanson's hawk that was cooperative and let us stop to take some pictures. 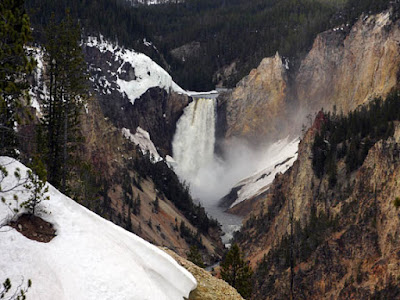 Then we headed up top the Grand Canyon of Yellowstone to take some scenery shots. This shot was taken from Artist Point and the falls in the distance are the Lower Falls of the Yellowstone River. We do not spend much time in this area because I am afraid of heights. Since places like this bother me we just took the shot and got going as quick as possible. 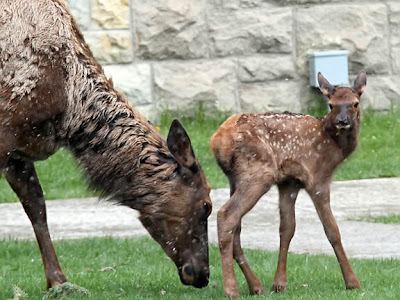 Next stop was Mammoth where we were surprised and pleased to find that one of the local elk females had calved the day before. A small heard of elk live in Mammoth and the surrounding area. Since the main predators of elk are wolves and grizzly it is smart to stay in a place that has a lot of people to keep the predators away. However the elk themselves can be dangerous to people in Mammoth that get too close. The ranger, who was keeping spectators from getting to close to the elk and calf, told us that she had chased a park employee who unknowingly had gotten too close to the calf. 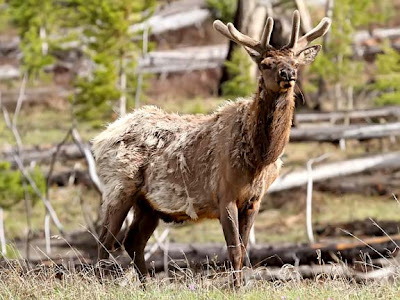 Bull elk usually are found alone or in small groups at this time of the year. A healthy buck like this does not have too much to fear from the predators so they usually wonder about more in the highland areas on the north side of the park. During the fall each bull will be surrounded by a harem of females in hopes that he will find one that is receptive to mating. Shortly after we took this picture it began to snow again. It was not bad on the north end but as we passed Mammoth and headed towards Norris the snow on the roads began to get deeper and driving more treacherous. I am used to driving in the snow but roads here in Minnesota get plowed and sanded. They are also wider and do not have steep drop offs or rivers on the side. We were worried that we might have to park and sleep in the car. Fortunately things got better after Norris and we were able to make it out to West Yellowstone.

Posted by Ecobirder at 3:00 AM

What a wonderful adventure! Thanks for sharing!

I love Yellowstone and I love your captures, particularly the animals! How beautiful they all are! A wonderful adventure indeed! Have a great week!

Wow - what a wonderful adventure. So many magnificent creatures!

So great! Like the photos very much, so nice to be able to see those beautiful and wild animals!

Fantastic photos, and of course I love the ones of the moms and their newborns.
— K

I love your animal shots!!! You make us feel so close to them... and they are utterly gorgeous creatures!

Well, if I can't make it to Yellowstone in person, it sure is nice to see your photos and learn more about it on your blog. Terrific otter shot.
Anne