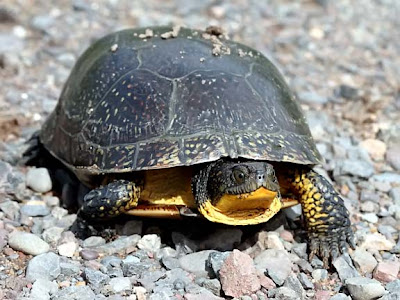 This afternoon while I was out looking for dragonflies after work I came across a Blanding's turtle. Blanding's turtles are a bit larger then the more common painted turtle and easily recognized by their bright yellow chin. They are found primarily in the Great Lakes region of the United States and Canada. Minnesota is on the western edge of their range. 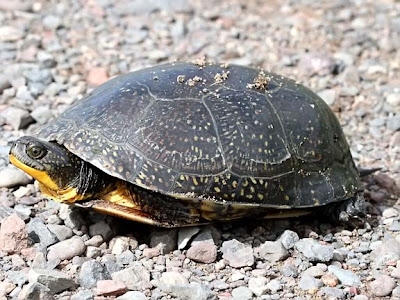 Blanding's turtles are usually found near wetlands such as ponds, swamps, marshes. They will often use ephemeral wetlands during the summer. These fishless wetlands are usually full of aquatic invertebrates and insects which are a main food source for the turtles and the waters of these shallow pools are also usually warmer which aid in the egg development for females. During the winter the turtles move to deeper wetlands that will not freeze all the way to the bottom where they bury themselves in the mud. The peak time that they move to their summer wetlands in Minnesota is in June and July. June is also the month when females leave the water to go lay their eggs. I am not sure if this turtle was looking to nest or just moving to nicer digs but since they are a threatened species here in Minnesota I made sure that it did not stay out in the middle of the road where it might have been hit by someone who was not paying attention or worse yet someone who did not care.

I love turtles. I'm also fond of the color yellow so this fellow is right up my alley! :D Lovely shots and thanks for the information, too.

What a handsome turtle!

Thanks for the good information, I wasn't aware of this turtle. Never seen one in our part of Minnesota, we may not have them.
She's a beauty. (or he)
I've been devastated by the number of road fatalities we've seen this year, with paints & snappers.
Good to know there are others looking out for them!

he or she is beautiful.

Turtles are such interesting animals. I always had one at school when I was a teacher. - Margy

What a gorgeous turtle! I've never seen a Blandlings turtle before but that is not a bland color. Beautiful yellow. :)