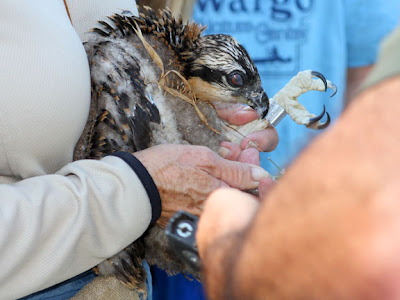 Since it is now June it should not be long before all of the osprey platforms around the city are littered with chicks. When they first hatch they are pretty small and mom has to stay on the nest to make sure that they stay warm so it usually takes a week or two before you begin to see little down covered heads peaking over the sides of the nest. 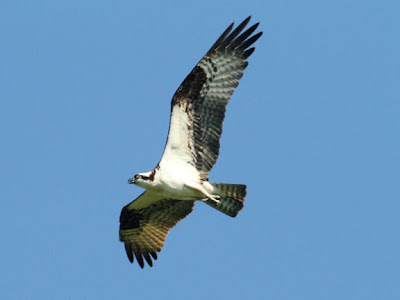 By the beginning of July they are big enough to be banded. Back in 2010 I was fortunate enough to attend several osprey banding sessions around the cities. These pictures were taken from the banding at the Wargo Nature Center, which is a nest that I have been watching for Osprey-Watch. They brought in a boom truck to take the thee chicks down from the nest. Then they give them 2 bands, one from the Department of Fish and Wildlife and the other which is a tracking band to help identify the bird when looking at it through a scope or binos. As you can see mom and dad were not too thrilled about the crazy people taking their babies. But soon the babies are back and the osprey win in the end.

Our local (newly built) Toyota showroom provided a purpose built very (very) high platform for an Osprey family not far from their entrance - I wonder if they destroyed an old nesting site when they built it - but the new nest is well used and provides a wonderful opportunity for an observation point for all the little humans below. They are truly striking birds - fairly noisy - and not at all put off by us lot watching them!

beautiful birds...hope Mom and the baby will together forever in no time :-) Dropping by from last weeks Camera Critters