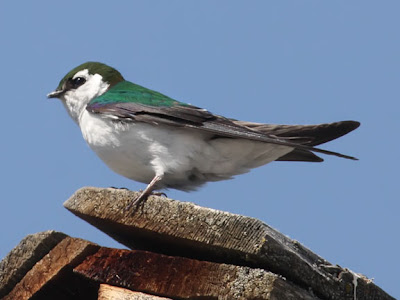 The violet-green sparrow is the most colorful sparrow that I have ever seen. Most of their feathers are a vibrant green color, similar to that of tree sparrows.The green is accented by black and purple wing tips and a mostly purple tail. They are found in the western half of North America breeding as far north as Alaska. They spend the winter in Mexico, Central America and northern South America. 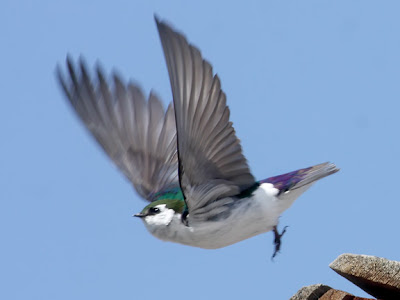 The violet-green sparrow breeds in open woodlands.They are a cavity nesters, nesting in tree cavities, rock crevices and old woodpecker holes. They will also nest in more man made items such as under the eaves of buildings, under bridges and sometimes even in nesting boxes. Although they may nest individually they sometimes nest in colonies of up to 50 birds. They also migrate and sometimes feed communally in flocks often mixed with other species of swallow.

Such a lovely common bird. I really like the shades of green and purple together.

I love that flight shot!!

What a lovely little bird.. your images are fantastic.

You do show great bird photos for every occasion!I enjoy visiting your blog, though many of your birds are strangers to me.

A beautiful bird indeed! I used to see them in Utah!

Great shots. I really liked the flight shot! It shows the speed of the moment!

Great shots of an awesome species - note that in your text the word "Sparrow" begs to be swapped for Swallow".