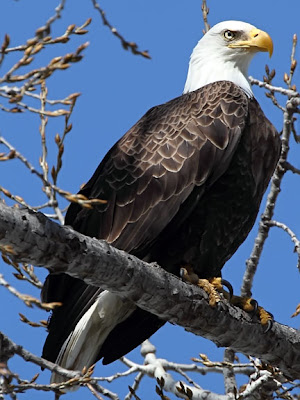 Minnesota in winter time is probably not the best place to go bird watching. In most of the Christmas Bird Counts that I participate in, we feel lucky if our group spots 20 different species. However winter does provide some more unique birding possibilities. Minnesota does have a large population of nesting bald eagles, second in the United States, but during the winter many of the eagles from Minnesota and surrounding states and Canada congregate in the south eastern part of the state. 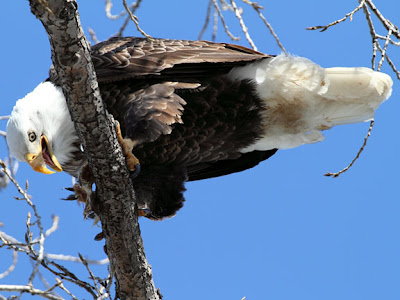 Bald eagles have over 7000 feathers so they are not migrating south because of the cold. The reason that they head south is because of food. Even though bald eagles are opportunistic feeders that will eat whatever food is the easiest to obtain, including roadkill, as a sea/fish eagle they are designed to catch fish. So in the winter when all of the lakes and rivers freeze up they head to open spots on the Mississippi River in south east Minnesota. The eagle in the photo above is enjoying its morning catch.

Posted by Ecobirder at 8:05 PM

Of course! I'm used to eagles in areas where there is open sea water, so I've never thought of lake-fishing eagles having to find open water in winter.
Learn something new every day, even on Christmas Eve. Wishing you the best birding of the Christmas season and in the coming year!

Such a regal pose, great shot