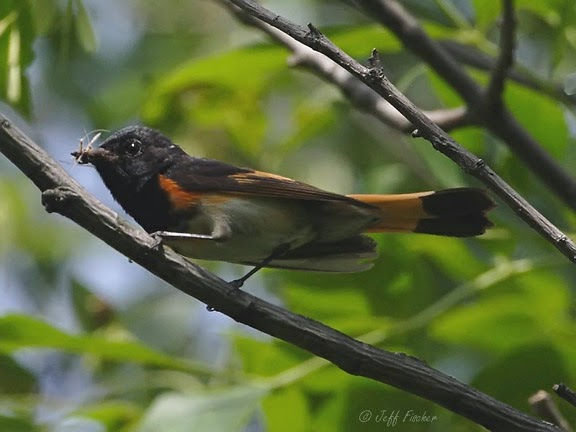 The American redstart is a small warbler that breeds in the eastern United States and most of southern Canada. Their preferred habitat is deciduous forests preferably with a good deal of shrubs and undergrowth. Like most warblers their primary food is insects.They catch their prey both in the air and by gleaning from branches and leaves. Often they will flash their tails and wings where the flash of color startles insects allowing the bird to snatch them as they try and fly away. The bird in the photo above has caught some prey. Since they are insect eaters they do migrate south to Central America and northern South America during the winter months. 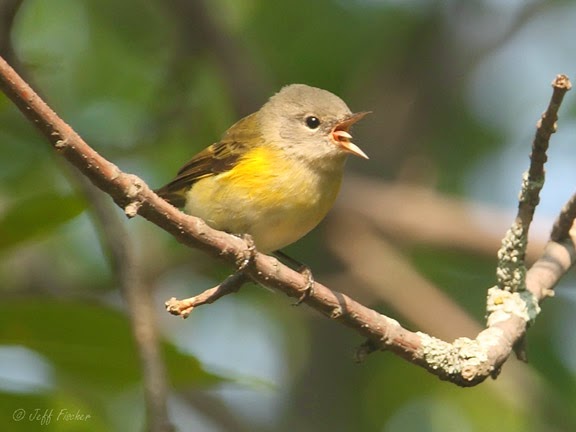 The American redstart is sexually dimorphic, meaning that there is an obvious difference between males and females of the species. Males are predominantly black with a white under belly and orange patches on their sides, wings, and tails. The top photo is an example of a male. Females are not as colorful. They are a combination of yellow, olive, and grey, as demonstrated by the second photo. Immature birds, both male and female, have the same coloration as the female. The male will begin to molt into their adult plumage in its second fall. Most males do not breed until they are in their adult plumage, although some immature birds do try to hold a territory and a few are able to attract a mate in this stage. 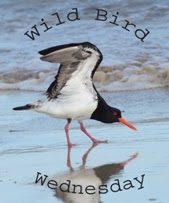 Posted by Ecobirder at 2:14 PM

Both males and females are beautiful, but to my ignorant eyes I would think they were two different types of birds.

Thanks for the explanation about the name. We don't have this family in Australia, so I didn't know about the flashing of tails and wings to startle insects.

Quite a difference between the two. Great shots!

Very nice photographs and informative post!
We look forward to seeing Redstarts each fall and spring during migration. They sure brighten the tree tops!

Awesome shot with the insect in the first shot. Visiting from Wild Bird Wednesday. :)

Another brilliant bird, and one that I can say I have seen..... in Venezuela