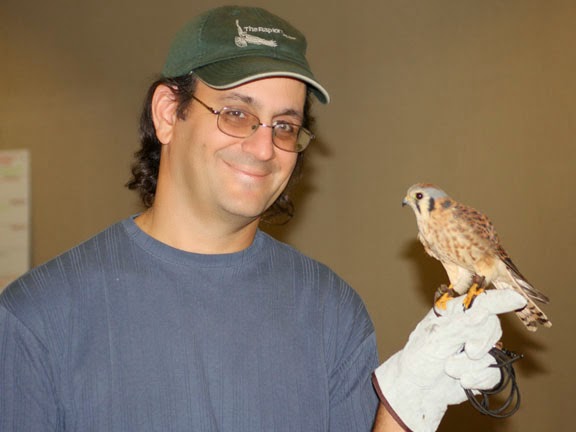 This Tuesday will mark the seventh year anniversary of the Ecobirder blog. I began the blog on Earth Day in 2007. In October of the 2007 I began as a volunteer at The Raptor Center. At first I began as on the Transport Crew. These are the people that go out to pick up injured birds. As a part of the Transport Crew I was happy that I was helping The Raptor Center fulfill their important mission but since I was only at TRC when I was dropping of a bird I did not feel like I was as involved as I wanted to be. 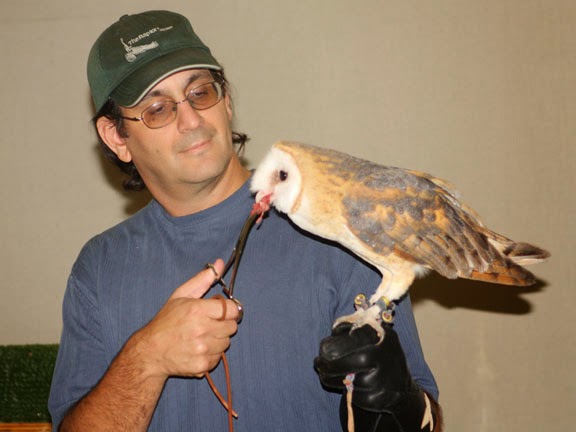 So I asked the Volunteer Coordinator if I could come into the center and help out during my transport shift. So they agreed to let me become a lobby assistant on Wednesday afternoon. The lobby assistants job is to greet visitors when they arrive and help out with the office administration. This was definitely a step in the right direction but I was still not completely satisfied. So I started bugging the staff and with in a couple of months I was able to worm my way on to the Education Crew. 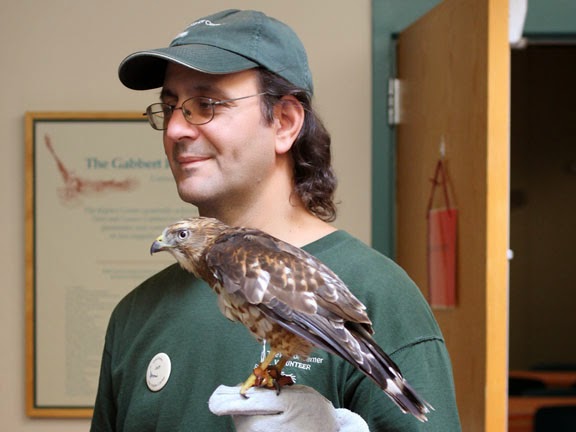 When you begin on the education crew you spend most of your time cleaning. You clean the crates, you clean the mews and you clean the dishes. That is because one of the primary jobs of the ed crew is to take care of our 30+ education birds. The other primary job of the ed crew is to help educate the public about raptors and TRC. Eventually after training you get to begin interacting with the public by doing tours. Since I already knew a lot about raptors, after all I had been photographing them for about 20 years before beginning at TRC, it did not take me long to start giving tours. Eventually after a year in education I auditioned and began being trained as a handler. 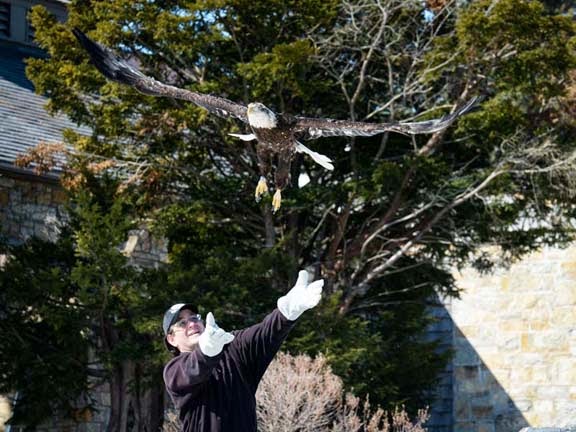 Handlers use many of the techniques of falconry to work with the birds. Handlers are responsible for doing programs for the public and private groups. They also help the staff reinforce positive behaviors by feeding the birds while they have them on the glove. The photos above are just 3 of the birds that I have handled over the past 5 years. Handling is one of the most rewarding experiences at The Raptor Center. Another rewarding experience is the occasional opportunity to release an eagle. This winter we had a lot of snow which made it very difficult for the Flight Crew to take the eagles out for their final practice flights. So as the snow melted we had a good number of eagles that were ready to be released. Since I had not released one since February of 2008 I had the opportunity to release this very handsome male at the Carpenter Nature Center at the beginning of April. My friend Les, who is a great photographer and a member of the Wednesday afternoon ed crew photographed the release for me. The other photos where taken by my old crew leader and TRC staffer Kelly Scott. 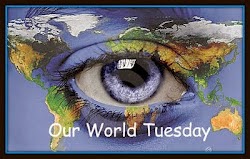 Posted by Ecobirder at 8:36 PM

Labels: Our World, The Raptor Center

The wingspan of these birda are absolutely amazing! One question: why did it take so long till you had the opportunity to release a bird? Or is that not part of your job?

It's good to meet you and read your blog. Well done on getting in on the Education Crew. We have several Raptor Centers doing the same good work in South Africa. Oh, and happy Bloggaverssary! Greetings, Jo, East Africa

congrats on your perseverance and dedication. I can only imagine the wonderful sense of satisfaction it brings being involved with these amazing raptors. Beautiful photos

How wonderful to be volunteering in such a wonderful place! I am always excited when I see hawks circling any place near where I am.

Glad you've been contributing to ABCW; had NO idea how many bird variations there were.

I spent four years doing the same things (on a much smaller scale) at the Springbrook Raptor Center in Itasca, Illinois. I loved every minute of it and I am so glad you are able to continue with your committment. Since that Center was closed down because of funding (familier story, I'm sure), I now volunteer with the NIRC ... we are still just doing education programs, but hope to get back into rehab down the road. It is not easy to start from scratch. Good on you Ecobirder ... it is a needed as well as rewarding job.

I seem to have followed your blog for the last six of those years. You look so happy and contented releasing that bird.

Such determination. What a wonderful story! And wonderful photos in this post.
Congratulations on seven good years of blogging and sharing.

(I took care of the livestock at Heifer Ranch in Arkansas, www.heifer.org, as a full time residential volunteer. So I know the pleasure you get from such work with animals.)

Shalom and all the best to you.