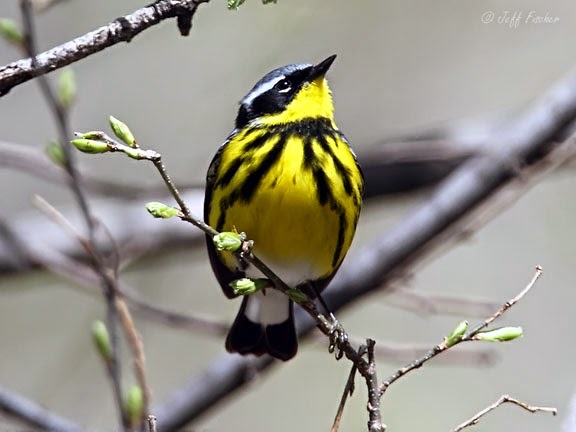 The magnolia warbler is a colorful wood warbler that breeds in the eastern half of Canada and the Northeastern United States and northern Midwestern States. They typically nest in the dense undergrowth of coniferous forests. During the winter they migrate down to Mexico and parts of Central America where they can be found in a variety of habitats. The reason for their migration is the same as most warblers, they are primarily insect eaters. They typically eat caterpillars, beetles, insect larva, and spiders, which they glean from the trees. They also prey on flying insects, such as butterflies and supplement their diet with fruit and nectar. During the winter the amount of their diet which consists of fruit and nectar increases. 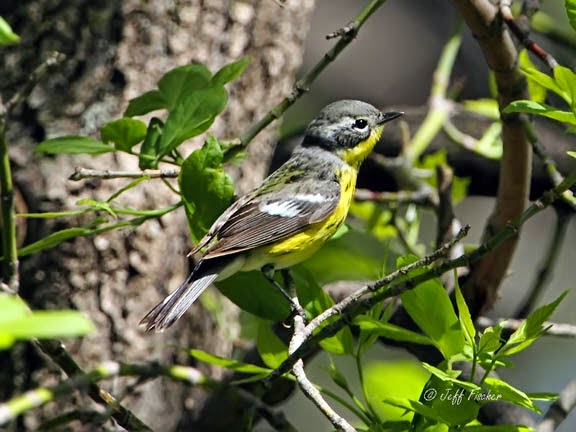 The magnolia warbler was named by Alexander Wilson in the early 1800's. Wilson called them the black and yellow warbler but gave them the scientific name Setophaga magnolia, because he collected his first bird from a magnolia tree in Mississippi during migration. As time went by the common name changed to match the Latin scientific name and the species became known as the magnolia warbler. The top photo is a male bird and the second is a female. As is the case with many species of song birds the male is much more colorful for it is up to him to catch the attention of a mate. Posted by Ecobirder at 5:17 PM

What a delightful little tweeter.

That is a RIDICULOUSLY great photograph of a stunning bird, wow. Nicely done, and thank you for sharing that gorgeous creature. =)

blossoms at the mention of that cute bird

What a beautiful birds adn a stunning first shot

I always think that you have more colourful birds in your part of the world than we have here in north Europe. Thanks for the interesting information about these warblers!
Wil, ABCW Team.

Of all the bird thumbnails on WBW this one stood out with the most gorgeous plumage and I couldn't wait to open up your blog post and get a better look. It's a stunning bird!

Such a cute little bird! Charming. The color is almost green/yellow, like lemon/lime... not normally my favorite shade, but against the black and white pallette, this bird carries it off in style. Thanks for details about species as well. Found you after posting to ABC! Amy

What wonderful photos! You are fortunate! :-)

What a beautiful bird

What a handsome bird. Wonderful shots of these two!

What a handsome bird. Wonderful shots of these two!