For many people, birding consists of putting up some feeders in the back yard and then watching to see what comes to visit. This is a great way to see a lot of birds with out having to venture too far. Up here in Minnesota common visitors to feeders include cardinals, juncos, sparrows and chickadees. The typical type of chickadee that we see here are the black capped, however if you want to get a bit more adventurous in your birding you can head up to northern Minnesota in the dead of winter in search of the boreal chickadee. 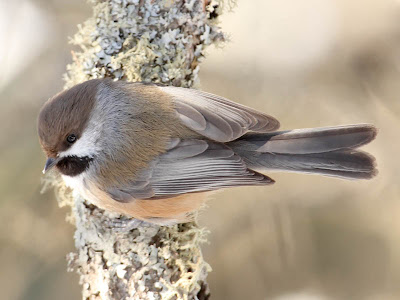 Boreal chickadees look similar to black capped, except that their cap is brown instead of black, which makes them a bit difficult to spot especially when they mix in with black caps. 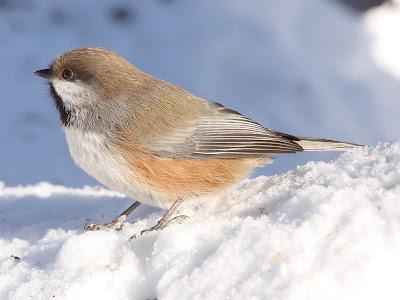 Northern Minnesota is one of the few places in the continental US that you might have a chance to see these birds. They typically spend all of their time up in the boreal forests of Canada and Alaska but during the winter, when their is less food available, they will cross into the most northern reaches of the US, which includes northern Minnesota. These pictures where all taken up in the Sax Zim Bog area back in January (1-10) 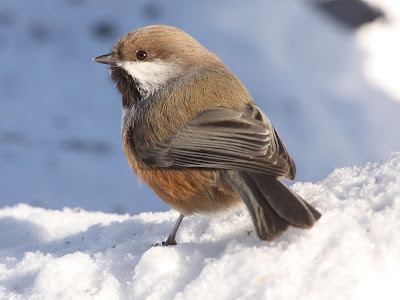 The problem is that a big part of their diet comes from insects, which are not very abundant during the winter time up in Canada and Alaska. They compensate for this lack of food during the winter by cache food during the warmer months. They supplement this cached food with pine cone seeds but in year where the pines produce less cones those birds that do not have enough food cached will head south in search of sustenance.

Love these little guys! Nice texture on the branch against the bird in the first photo...makes an interesting shot. Enjoyed this post! Thanks for sharing.

Cute little guys. I'll probably never get to see one--doubt I can convince hubby to take me to Minnesota in the dead of winter. :) Thanks so much for sharing these!

Great photos and story Its hard to believe the tiny birds live in such extreme cold.

I am always dazzled by the clarity and brilliance of your pictures, which makes me wonder what kind of lens you are using and are you sitting out there in the snow for hours with a tripod?

Never heard of this kind of chickadee. It is beautiful. Thanks for sharing.

This is a beautiful little bird and so strong to withstand that snow. Helen

The lighting is so special in these shots sandy

These are soooo cute!!

their wings are beautiful

I only thought there was one kind of chickadee! These are similar to the ones I know (the black capped?), but the colouring is softer! I love the way you have gotten so close that we can see the texture of the feathers, especially on the first photo!

What a beautiful chickadee..
nice photos!

What a cute little birdie!