Last August I traveled to South Dakota to participate in a three day shorebird workshop. 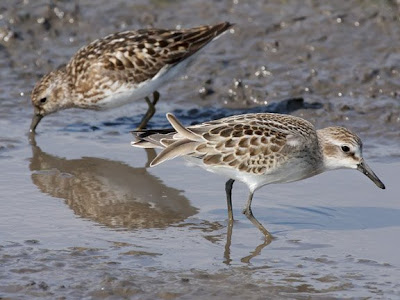 Small shorebirds are notoriously difficult to identify. Many have only subtle marking that distinguish them from other similar shorebirds. 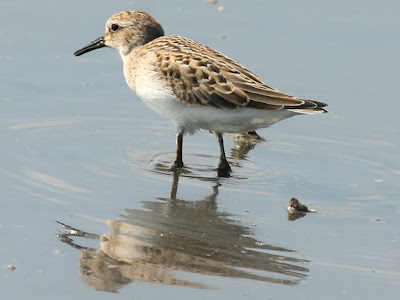 The semipalmated sandpiper is one of the smaller sandpipers and it is often difficult to distinguish it from the least sandpiper, especially since they often can both be found in the same mixed flocks of shorebirds. 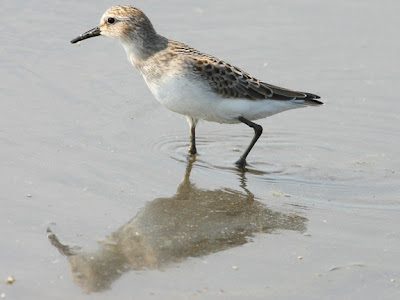 Both the least and semipalmated are approximately the same size, around 6", but the least usually appears darker in color, more of a brown hue compared with the semi which is lighter and more grey. 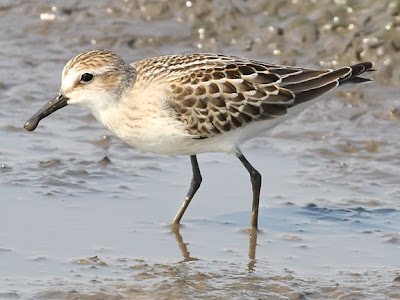 The easiest way to tell the difference is that the semipalmated has dark legs compared to the least which has yellow legs. 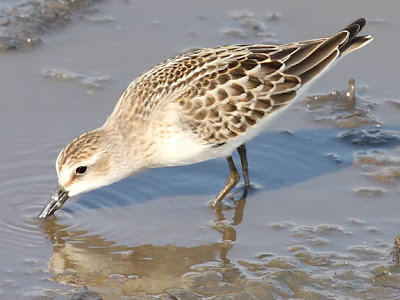 The semipalmated also has webbing between its toes, which the least does not. Palmated means webbed and that is where they get their common name. However it is not very often that you will get a good look at their toes since they are typically planted in the mud. 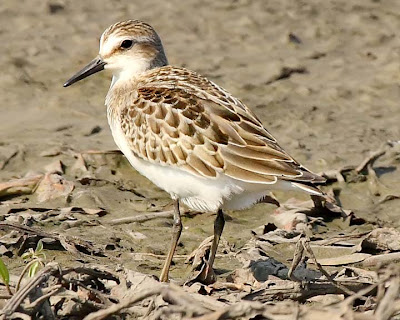 It is even more difficult to distinguish the semipalmated sandpiper from the western sandpiper. Both are approximately the same size, have dark legs and webbed feet but the western sandpiper is more of a reddish brown and has a longer bill. Fortunately there is not a lot of over lap in range between the semi and western sandpipers, but sporadic appearances by each type have been spotted in the other ones range.

Posted by Ecobirder at 3:03 AM

We dont have this bird in NZ so very informative post and a great set of photos.

Sounds as if it would be kind of hard to tell the differences in those kinds of birds. Great pictures of them. Helen

I just love the markings on their wings!

Beautiful pictures of the sandpiper

I love watching shorebirds, but am terrible at identifying them. Thanks for the tutorial! Great pics as always.

Thanks for a very informative post.
During a visit to US some years ago I found them very difficult to tell apart - thank goodness for an excellent guide. Cheers Frank

Fantastic, love the reflections and your photos are so clear!

me ann my camera said...

These shots are so clear and beautiful. What a nice looking shorebird.

Your photos of birds are simply fabulous. And ur posts are great.

Is it just me, or does the sandpiper look a bit sad and lonely in photo number 3?

Thanks for all the information. We have sandpipers along the Oregon coast. I always love to watch the little flocks along the shore line running in and out of the waves. Was unaware of the varieties. I will have to scope them out better next beach excursion. Thanks for sharing. Loved your blog.

Awesome shots and thanks for the descriptions. I'm going to pull up some shots I took last week and see if I can not identify them. I doubt it but I'm going to try.
:-D