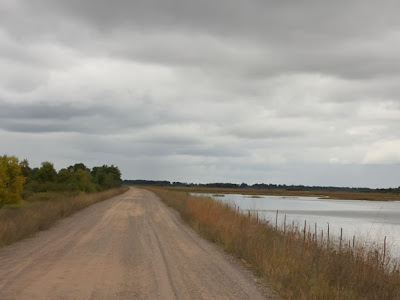 This weekend I headed up north of the Twin Cities for the Crex Meadows Fall Wildlife Festival. Unfortunately as you might be able to tell from the picture above the weather was not optimal for wildlife photography. 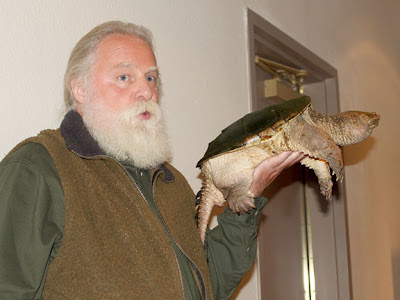 With the grey skies and the drizzle really messing up the photo opportunities I decided to check out the programs that they were having at the Visitors Center as part of the festival. The first program was on Wetlands and was led by Chris Cold from the Wisconsin DNR. Chris began with a PowerPoint presentation and ended the program with a few props he brought with, these included a couple of turtles and a fox snake. 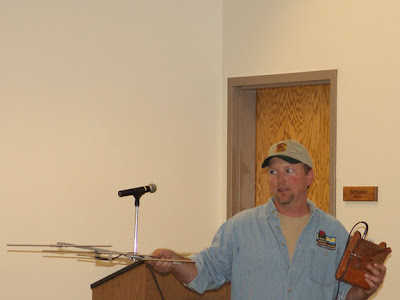 The second program was on the state of the wolf in Wisconsin. This program was led by Bob Hanson, who works for Crex and has been studying the wolves who have a territory there. The program included a Power Point presentation, I was happy to find out that wolves are surviving and reproducing better then the Wisconsin DNR had expected, photos of wolves from remote trail cams that were set up by a volunteer, and a demonstration of the tracking equipment, they have collared the alpha male from the local pack. 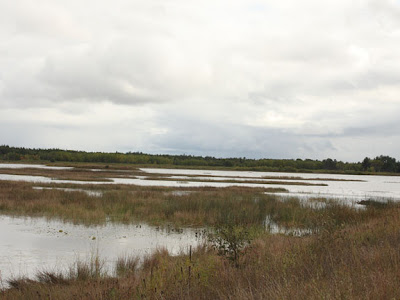 After sitting inside for a couple of hours I decided to go out and see if I could find any wildlife that I could photograph. The sky had lightened up a little and the drizzle had stopped for a little bit but as you can see by the above photo it still was less then optimum conditions. 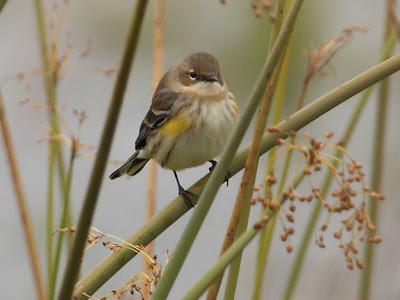 I did manage to find a few things to photograph though. There were still quite a few passerines around. Most of them were either sparrows, like white-throated sparrows, or yellow-rumped warblers. Yellow-rumps do not winter as far south as most warblers do so they are usually the first type of warblers that we see in the spring and the last type that migrate south in the fall. 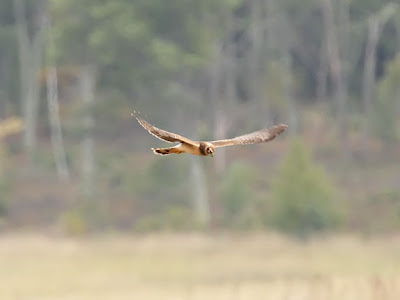 Fall is also a good time to see a lot of raptors like the northern harrier. There are usually quite a few harriers that stop by and spend some time at Crex each fall. Crex is perfect habitat for the low flying hunting style of the harriers, with vast open spaces and plenty of rodents to eat. 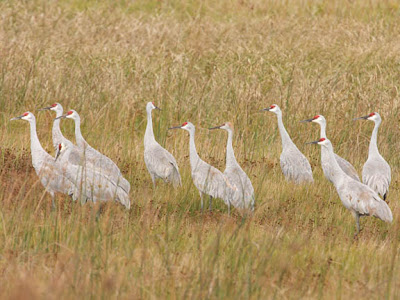 However the big reason why most people visit Crex in the fall is to view the sandhill cranes. These large birds use Crex as a staging location for their fall migration. Currently there are reportedly thousands of cranes in the Crex area feeding in the fields during the day and roosting in the shallow waters at night. By roosting in the water these birds have some warning if a predator were to approach them in the dark of night. 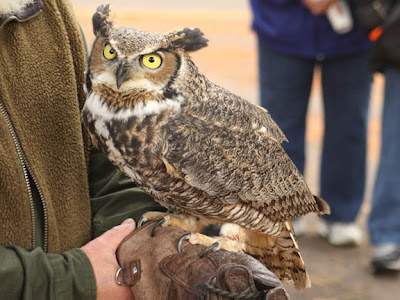 Since there still was not enough light to get any great pictures I decided to head back to the Visitors Center and see what else was happening at the festival. I found Chris Cold outside with a couple of raptors that he brought with. On his glove he had a great horned owl that was an imprint bird. Imprinting is when a bird is raised by people when it is very small. During this time the young bird is learning behavior by observing its parent, however if it believes that its parent is a human that is caring for it then it will become confused and will not learn important lessons that it will need to live out in the wild. 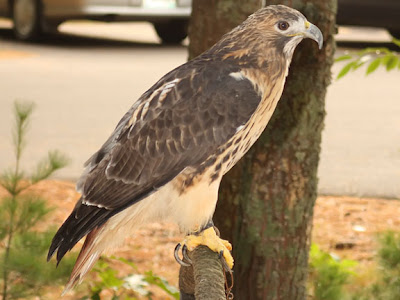 Out on a ring perch Chris had a beautiful female red-tailed hawk. It was obvious that she was female because she was very large. This was a falconry bird that Chris has had for 18 years. She was quite well behaved at least until a couple of large barking dogs got a bit to close then she baited from the perch and ended up on the ground. As soon as the dogs were whisked away she calmed down and returned to her perch.
Despite the weather the festival was a lot of fun and I had a good time and so I showed my appreciation for the event and for the park itself by signing up as a lifetime member to The Friends of Crex.

Sounds like a wonderful day and a wonderful program. Great shot of the Yellow-Rumped Warbler. We get great numbers of those during the winter feeding on the Wax Myrtle berries.

I'm in love with the cranes, but the harrier photo os my favourite. A perfect moment.

Great photos, I love all the birds. The owl is really cool and the Sandhill cranes are pretty. Cute YRW too. Looks like you had a great birding day.

Great shots in spite of the weather. I have read that sandhill cranes winter nearby at the Consumnes river and I am dermined to check it out.

Even with the weather less than optimal, you found lots of interesting stuff to show. It's interesting to see the sandhill cranes doing well, and I'm glad the wolves are enjoying ecological success as well.

oh, too bad you didn't get to take pic of the wolf/wolves. Still, you took some quite good photos of the wildlife. my world entry is up too.

Just spent today up at Crex -a pretty drive from Stillwater despite the gray skies. I was blessed to come upon a very large group of Sandhill Cranes in a just harvested corn field, outside the Crex boundaries, on hiway M, just south of the meadows. THOUSANDS were gathered and arose en masse -amazing sight to have them circling, coooo-oooo-ing overhead!