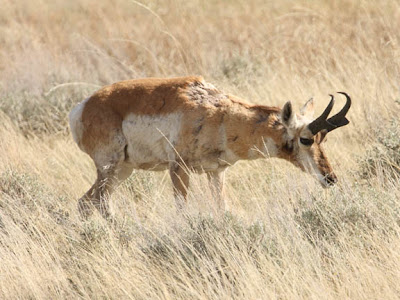 The pronghorn is the fastest land mammal in the Americas. They have been known to reach speeds in excess of 55 MPH, which is the second fastest land mammal in the world next to the cheetahs of Africa. The pronghorn is often called an antelope but even though they resemble some of the antelope from the plains of Africa they are actually the only member of the Antilocaprideae family that still exists. 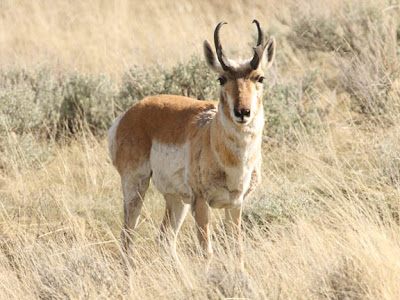 These animals are true plains animals with several adaptations that help them exist in the dry plains of western North America. Looking at them you will notice that they have large eyes which sit very high on their head. Pronghorn have excellent long distance vision which helps them to see predators like wolves, coyotes and grizzly bears from a considerable distance. Usually pronghorn travel in herds which gives them more eyes to watch for predators. When a predator is spotted the pronghorn will use its great speed to try and out run the predator. 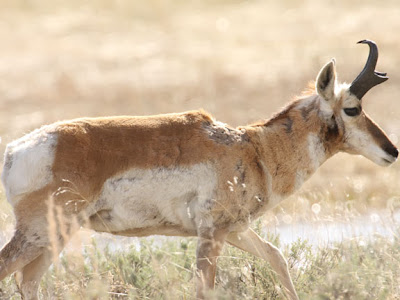 The Pronghorn is named for its unusual split horn. The horn is made of bone which extends out from the skull. The bone is covered by a sheath made of a hair like substance or keratin. Each year this sheath is shed and then needs to be regrown. Males typically have larger, well developed horns, where females have smaller horns or no horns at all. This male was a part of a small bachelor group which I was photographing as it was traveling across the Lamar Valley in Yellowstone.

Posted by Ecobirder at 7:39 PM

We saw one up close once...what beautiful eyes it has!

Great photos of the pronghorn, I got to see some at Yellowstone too.

Great photos and so interesting...thanks for sharing!!!

That is interesting. You got some real good shots from the wild.