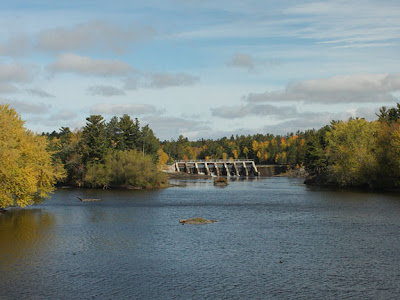 Before our first snow fell this weekend I decided to take a day off of work and head up north to try and photograph some of the fall color. Even though the snow was bound to melt, it is still a bit early for snow here, once it snows the trees tend to drop their leaves. On the way up north the freeway passes over several small rivers and creeks which have always peeked my desire to take their picture. Unfortunately stopping on the freeway in Minnesota can earn you a ticket so I passed by most of these photographic opportunities. That was until I got to Cloquet, MN. At Cloquet there is a county road that crosses over the St Louis River a block or so off of the freeway. So I got off of the freeway and drove over to the other bridge and took a few scenery pics of the river below. 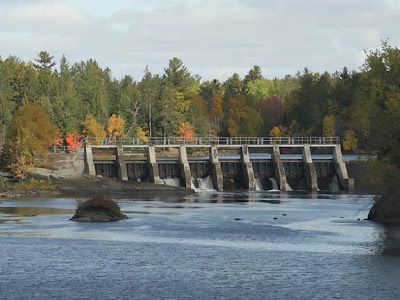 Here is a close up of a dam that spans the St Louis just north of Cloquet. The St Louis River is the largest river in the United States that flows into Lake Superior. The river begins near Hoyt Lakes, MN and runs 179 miles draining into the tip of Lake Superior between the cities of Duluth, MN and Superior, WI

Posted by Ecobirder at 3:51 PM

Great shots of the dam, looks so peaceful out there and autumn makes it more beautiful.

Nice shots. A storm is moving through California and will put an end to our leaf peeping in the Sierra.

Great photos of the dam, The fall colors around teh water are nice too.
Thanks for sharing.

You have a real talent for photographing animals-- birds!

Although, to me, dams scream "man alters nature," this is a stunning photo!

Great you went out of your way to get these lovely shots.

Love the fall colors, I hunger for them since we are on the gulf coast this autumn.

I love your last photo especially... intriguing to imagine the force of the water behind those walls... and what it would look like if it suddenly opened. Carol