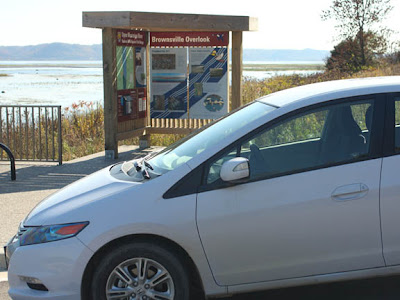 On Saturday November 14th the Upper Mississippi National Wildlife and Fish Refuge sponsored their annual Waterfowl Observation Day at the overlook just south of Brownsville Minnesota. I had planned to go down for the event however the weather was not very cooperative, its hard to justify driving 3 hours each way when I probably would not get very good pictures with an over cast sky. I did head down on Sunday though which was my third trip to the area in the past couple of weeks. 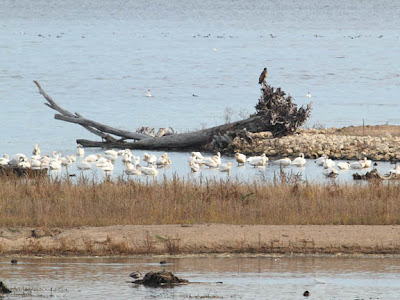 The overlook, which sits on the edge of the Mississippi River near the Minnesota, Wisconsin and Iowa border, was opened back in 2007 and offers visitors an excellent view of migrating waterfowl. This part of the river has also been under construction. Several groups, including the Army Corps of Engineers, Minnesota DNR and others, have been working at reestablishing many of the small islands that have been eroded away by the river. 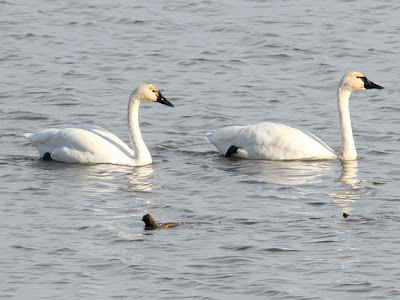 These islands are important to the health of the river and the flora and fauna that depend on it. The islands help protect the aquatic vegetation from the strong river currents. This vegetation is an important food source to many different waterfowl. The vegetation also provides habitat for fish and invertebrates which are a food source for diving waterfowl. So the Army Corps of Engineers has dredged sediment from the main river channel and used it to build these man made islands. 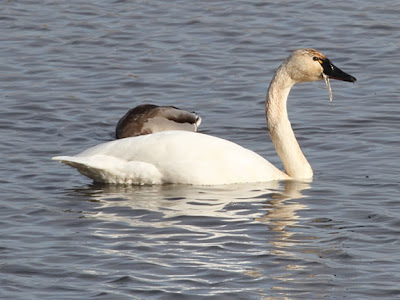 The main reason why many people visit the overlook is the large number of tundra swans that use the river as a staging area for their fall migration. Each year most of the eastern population of tundra swans, currently they estimate 12 to 15 thousand swans in the Brownsville area with another 5000 or more yet to arrive, leave their nesting grounds up in the arctic circle and head south, stopping here to fuel up for the long trip. 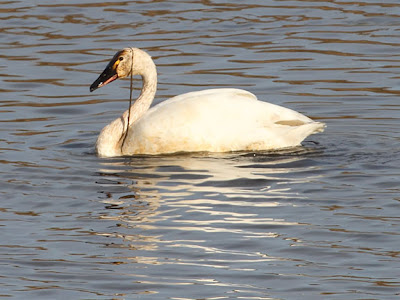 They stop here for the tubers, enlarged roots that store food for the plants so that they can survive the winter and grow again the next year, which each swans eats approximately 6 pounds of each day for several weeks. They will stay in the area eating until the river freezes up and then they will continue their migration to the east coast, where they spend the winter.

Great pictures. I liked your backstory. Thanks for sharing.

Beautiful shots of the Swans, such majestic birds. Thanks for sharing:)

Terrific shots of the swans! And I always love the information that you share with us. Fun to learn something new!

It's good to hear about the Corp of Engineers' work. Beautiful shots of the swans. You remind me that I need to go to Lake Matamuskeet this winter to see the swans there.

i am really fascinated by your bird shots 'coz only few member of myworld share animals. great job.

You're quite correct. The weather on Sat was not conducive to photographs. I was there Sat afternoon and the light was pretty low. Looks like you got some cool shots from Sunday though. I would've been there, but I had to attempt to chase that Ancient Murrelet that decided to disappear the next day..... oh well. lol