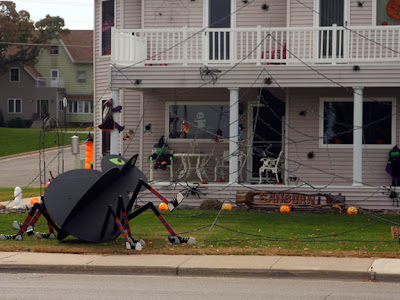 Halloween has sure changed over the years. When I was young Halloween was basically for the kids. Trick or treating was the big deal. On Halloween night most people had their front lights on and their doors open, waiting for the kids in their often home made ghost, princess, pirate or other costume to parade up to their door. 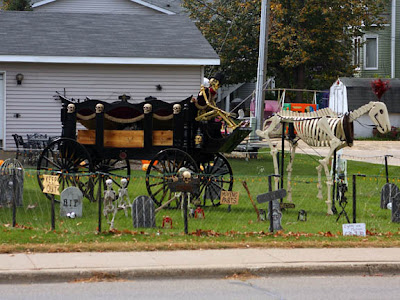 Today, Halloween is as much an adult holiday as it is for the kids. It is estimated that Americans spent around 5.7 billion on Halloween this year. That includes expensive store purchased costumes for the whole family, loads of sugary treats, that most often go to the person passing out the candy, and the new pad of Halloween home decorating. This house in Lake City, MN was the best example of Halloween decorating that I have seen. It included a giant spider with a web that was almost the length of the house and a grave yard complete with an old fashioned undertaker wagon piloted by a skeleton crew.

That is amazing!! Particularly considering the state of the economy! Seems somehow the kids, for whom it was such a big holiday, they get pushed aside so the "adults" can play! Love your photos! Hope you have a great week!

Wow. Really amazing. I don't remember Halloween being such a big deal when I was a kid (back in the last century). These folks really get into it. Thanks for sharing your photos.

Wow - that is some amazing Halloween decoration!

Even here in South Africa it is getting bigger and bigger - the effects of tv I suppose. But its fun - lots to bark at!

People is trying to have fun together with family and friends, and halloween is just one way to enjoy it

Wow! The decorations pictured here sure beat anything I've seen! They really go all out. I'm sure the kids love it too!