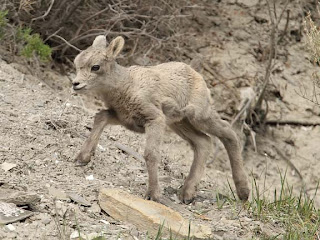 No calendar is complete with out a picture of something cute. The 2012 Ecobirder calendar had two cute pictures. April featured a big horned sheep lamb that we photographed in Yellowstone. We first saw the lamb with its mother on a ledge high up on the face of a cliff hours just after it was born. The next day we stopped back to try for some more pics and mother and child were no longer on the ledge. We went down the road a little ways were we found them near the road. After only a day the lamb had managed to climb down the shear cliff. 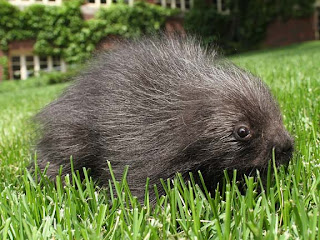 The second cute photo is in the month of June. This little porcupine was orphaned after its mother was hit by a car. With out any family to care for it the baby was sent to a rehabilitator. I got my chance to snap a few pics of this little cutie, as my wife would call it, when the education director at The Raptor Center, who is also a rehabilitator, was asked to porcupine sit. How would you like to be asked to care for a baby porcupine. Good thing that there was no changing diapers.
Posted by Ecobirder at 7:19 PM

Cute baby photos. I don't think I've seen any baby animal run and jump as early as a bighorn lamb.

those deadly needles look so sweet and soft!

Love the baby porkie. I understand the baby quills aren't as ferocious as the adult's, but you're right, I wouldn't want to change this baby's diapers.
So glad he was rescued.
K