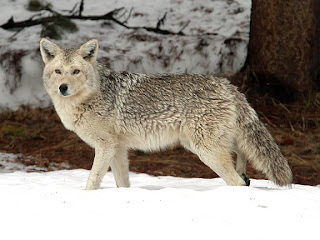 Our trip to Yellowstone last spring turned out to be a good one. We usually go at the end of May and in years that we have a late winter, like last year, we usually have a pretty good year photographing in the park. Maybe it is because in years where there is a late winter the mountains still have a lot of snow so the animals head down to the lower elevations of the park which are conveniently close to the roads. 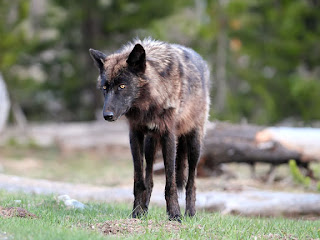 We had the opportunity to photograph all three types of Canidae that can be found in the park. Two of these species made it into the 2012 calendar. Coyotes are fairly common in the park and usually not too difficult to see but the coyote in the first photo was one of the best looking coyotes that I have ever seen. We also managed to photograph several different wolves. I featured this wolf a couple of weeks ago to help bring some attention to the plight of wolves now that many have been delisted from the endangered species act. If you care about wolves and our environment you might want to take another look.

Posted by Ecobirder at 9:56 PM

I don't know about other states, but I think that we in Minnesota are definitely aware of the plight of wolves...there doesn't seem to be a permanent safe haven for them. Your top photo is wonderful.

I love wolves! It's a shame that these poor creatures can't be left alone. Humans mess with everything including the life and death of wildlife. It's a shame.

That is a beautiful photo of the coyote. And anything that tells the plight of wolves is wonderful.
I love your photos, but usually cannot leave a comment. The words are too hard to read. I will try 2 or 3 times and then I give up.
This is the 2nd time for this comment. Very discouraging.

Oh WOW!!! This is a fantastic post. Visiting Yellowstone is on my "Life List", and I sincerely hope I get to make it happen!

Great photos! I would love to visit this park one day.