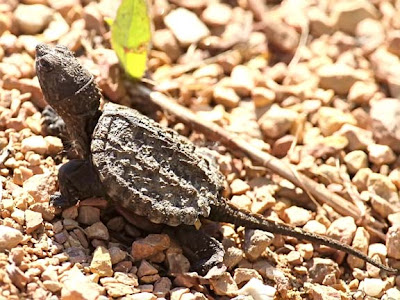 The common snapper is a large turtle that is found in the eastern half of North America. Like all turtles snapper begin life as an egg. The female will leave the water to find sandy soil in which she will dig her nest. She will lay between 25 to 80 eggs and then cover them with sand and leave. The eggs will hatch 9 to 18 weeks later depending on the temperature. The young turtles will dig their way out of the nest and then head to the water. 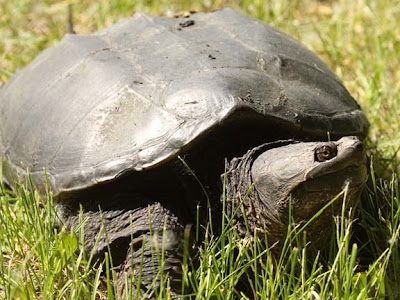 Snapping turtles can live a long time. In the wild they can live to be about 30 years old. Over time they grow quite large reaching up to 20 inches long and 35 pounds. Snappers are not able to pull their legs and head inside of their shell for protection like most other turtles. Instead when they are threatened they may snap at a predator. This behavior has given snapping turtles the reputation of having a bad disposition.

What a cute little guy!

I wouldn't call either of these cute, but they are interesting. Bro O's pond has a lot of these critters, but he would like fewer. They do bad things to the fish population.