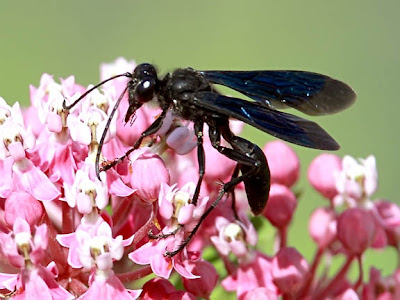 The blue mud dauber is a solitary wasp found through out much of the United States. Like many bees and wasps they drink nectar from flower blooms and in turn help to pollinate the plants. They do not make a hive or nest. Instead the female will take over an unused nest of another species of mud dauber. 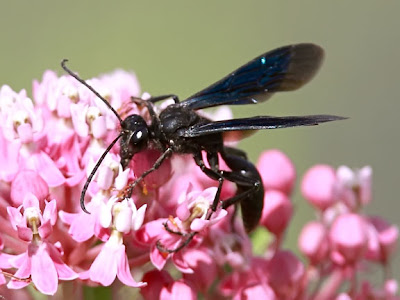 Blue mud daubers are generally not very aggressive unless you happen to be a spider. Females hunt spiders by flying into the spiders web and acting as though they are caught. The spider is attracted to the motion in the web and when it gets close the dauber strikes paralyzing it with its sting. The blue dauber will then carry the spider to its nest where it will include it in the egg chamber as food for the young. One of the common victims of the blue dauber is the poisonous black widow spider which makes the blue mud dauber much more popular with people.

Posted by Ecobirder at 9:27 PM