Swans are large waterfowl that are typically found in temperate climates. They are closely related to geese and share the same subfamily, Anserinae. There are seven species of swans found around the world, only two of which are native to North America. 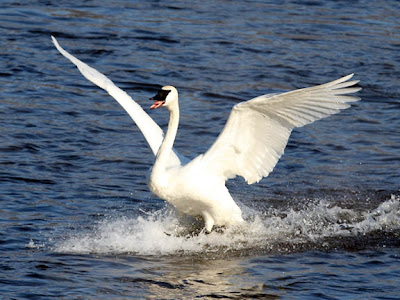 The trumpeter swan is the larger of the two North American species. They are the largest waterfowl in North America and typically weigh from 17 to 28 pounds. They breed on freshwater wetlands in Alaska, Canada and northern portions of the United States. They migrate short distance during the winter to locations where they can find open water. We do have trumpeter that nest here in Minnesota and western Wisconsin. With in the next couple of weeks I should begin to see cygnets, baby swans, swimming with their parents up at Crex Meadows, where they have numerous pairs breeding This photo was taken at Monticello, MN where the water stays open during the winter. 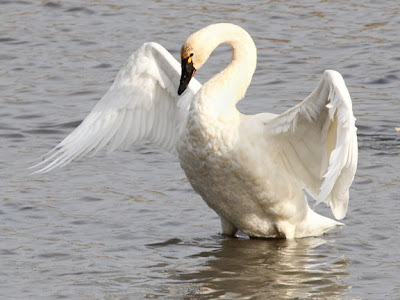 The other swan that we see here in Minnesota is the tundra swan. They are smaller then the trumpeters typically weighing between 16 to 23 pounds.Tundra swans do not nest here in Minnesota. As their name suggests they are a bird of the far north. They breed up around the arctic circle. During the winter they migrate south. Some parts of the population migrate down to Europe and Asia while others migrate down to the east and west coast of North America.A large chunk of the Canadian breeding population heads south into the central part of the continent before turning east and heading for the coast. In November the Mississippi River, in southern Minnesota, is filled with thousands of tundra swans that stop over to eat and rest. This photo was taken near Brownsville, Mn during the tundra swan migration.

Nice shots! We only have a few mute ones here.

I love these pictures and you imparting your knowledge. We all need to learn and understand the habits of our bird populations so we can facilitate their success. Thank you ...

There is something so stately and majestic about swans.
Wonderful photos.
I guess I never thought about it, but I didn't realize that geese and swans were in the same family.

I remember taking a class of school children to a waterfowl park. The trumpeter swans were stars! They certainly picked out me as the teacher and gave the pupils plenty to laugh about! lol!

They are just such elegant birds as you have so wonderfully captured in these photos.

Such magnificent captures!Thanks for sharing:)

You caught some incredibly great shots of the swans! Stunning!

Beautiful shot and very interesting information! In Vancouver, we also have a non-native species, the Mute Swan. I'm ashamed to say that Stanley Park has a policy of pinioning these swans so that they can't mate with Trumpeter and Tundra swans. I am told there are also some feral Mute Swans surviving on Southern Vancouver Island.

Ah, yes, the REAL swans can be found here! Come visit me to see the swans that I spoke of...

This was very educational! The photos were lovely, but the information was much appreciated! I love on the east coast of the US, and I guess it is the trumpeter swan we have here. I did have a close encounter with a male swan in Michigan, many years ago, while I was canoeing...guess I got too close to the nest! He dive bombed our canoe twice before we could get out of the way!

Lovely shots with the wings spread out!