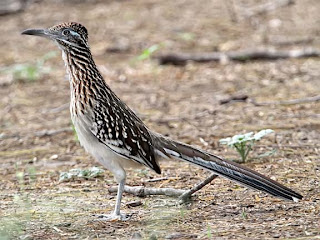 There are many birders in the world that we call listers. They are people who maintain lists of all of the birds that they have seen. Many people maintain a life list but the really hardcore listers can have state, county, city, monthly, yard list or even more. I am not a lister per say. I do consider myself to have a life list although I keep it in pictures. In my world if I do not have a picture it is not counted as a life bird. 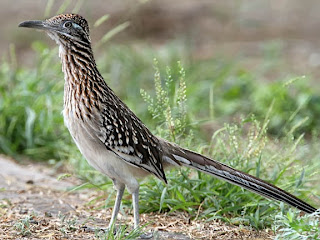 The greater roadrunner is a bird that has eluded my life list on several occasions.We have spotted them on trips to California, New Mexico and Texas in the past but they always scuttled into the brush before I could get a pic. This year i finally managed to catch one on digital film at the Bentsen State Park in south Texas. The greater roadrunner is actually a ground-dwelling cuckoo bird that lives in arid regions of the southern United States and Mexico. They are well adapted to their harsh dry habitat and can survive for long periods with out water by absorbing moisture from their food. They are omnivores and eat some fruit and seeds as well as insects, birds, eggs, snakes, reptiles, rodents and carrion. Some of the things that they eat are venomous including certain spiders, scorpions and snakes.One of the reasons that they are so hard to photograph is that they can run at speeds of up to around 19 MPH. I have heard that they can reach even higher speeds when evading an ACME rocket fired by a wily coyote but that is just hearsay, BEEP BEEP!

Wonderful shots of the roadrunner!

Fascinating bird! I am so sorry that we haven't got this bird in my country! Great post!
Have a great week!
Wil, ABC Team.

Great catch! They live on my street and I STILL can't capture them with my camera! They move too quickly!

A beautiful bird to see and your images are superb.. OK! I was beaten to it but what the hell... Beep beep!!

Love your ending comments...beep, beep.
I have only seen one road runner in my life.
I barely got a picture of the elusive critter. This was in Nevada out in the desert.
Nice shots.

I'm not discerning enough to be a lister, but I imagine it's fun!

Great photos of the Roadrunner. That's a bird I'd like to see!

Awww...ya beat me to the BEEP BEEP! Lol

How cute, love the way you tied it up at the end. BEEP BEEP. We lived in New Mexico for several years but never caught one on film.
Ann

Like you I have been in search of this bird. I have been in Arizona several times, but have yet to see one in person. You certainly have done your research and your information is very interesting. I hope someday, I will have the luck you had with these wonderful pictures. Thank you ... and Beep Beep to you too :)

Stellar captures...
I have learned not to buy Acme products, especially their rockets...
I agree with the philosphy of your first paragraph as a personal thing... No pic no tick!

What a neat looking bird! It would be a thrill to photograph it but I guess, living in Canada, that would be a long shot :)

I've never seen a road-runner in my life, great catch for this week!

Wow, I have only seen them in cartoons before. Great to see your version.

Great shots as always. The roadrunner is such a distinctive bird.

Roadrunners are totally cool birds!! Great shots. Thanks for your WBW!!

...it's rather comical; probably because of remember a cartoon series with the road-runner in it. Beautiful photos

Can I count my pictures if they're not very good ;>)...I love roadrunners (paisanos...fellow travelers) so we relate!

My Ruby Tuesday post, come and visit when you can.