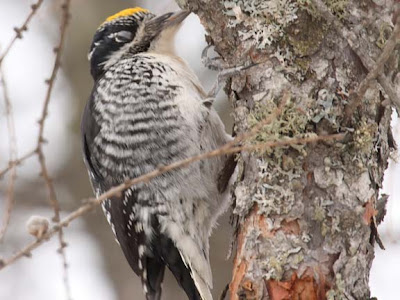 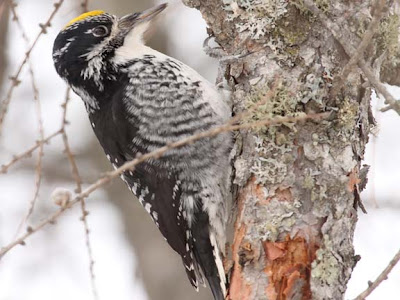 Three-toed woodpeckers are usually permanent residents with in their range, however some three-toed may migrate during the winter if food is scarce. They eat the larvae of different wood-boring and bark beetles. Unlike many other woodpeckers they do not usually bore into the wood in search of prey. Instead they use their beak to pry and scrape the outside bark from the tree leaving the insects beneath exposed. They then use their long and agile tongue to suck up the larvae. Three-toed woodpeckers can be confused with the black-back woodpecker, another three toed woodpecker found with in much of the same range, however the black-back has a completely black back where the three-toed has white speckles on black.

Beautiful bird - and probably my first image seen of this species

What a cute little woodpecker, haven't seen any of those around where I live.

Great photos of the Woodpecker.

This is a Woodpecker I haven't heard of before ... very cute or should I say pretty. Good information on it's eating habits ... thank you!

A beautiful bird and a first (even virtually) for me! Thanks.

Never heard of this one, how very interesting.
Ann

never seen one of them, what a beauty...belated congrats on your anniversary of blogging...I sometimes visit here and don't leave a comment and sometimes I save your posts links as they have such good bird info for a new birder.
I have really enjoyed learning from this site for many years even if I forget to leave a comment ..I usually read you.

I hope I will see one some day, but in the mean time, I am very THANKFUL for your post! Wonderful photos!