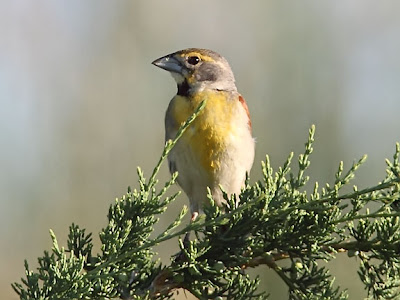 The dickcissel is a small passerine that can often be found in tall grass land habitat. They spend the summer on breeding territories in the grassland of the central plains. From eastern Montana in the west to Ohio and Kentucky in the east and from southern Canada in the north down to eastern Texas in the south. The nest is a cup style nest typically made up of grasses placed slightly off the ground in a the tall grass, shrub or small tree. 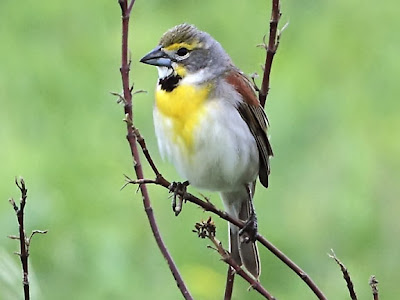 In the fall the dickcissel began to gather together in flocks. They migrate south into either the coastal areas of Central America or northern portions of South America. On their wintering grounds they will congregate into large flocks that may reach up to millions of birds. These pictures were taken last summer. The top photo was taken near Rochester, MN and the bottom photo was taken in Dakota County.

I love learning about all the birds out there via your blog. I wish my brain would retain the info better, but it certainly expands my level of awareness, nonetheless! Millions in a flock? Wow. Would love to film that.

Both photos are remarkable. I need to return often to learn more about birds from your blog. If you haven't already, have you considered publishing a book with your photos and information?

They look like they belong in the sparrow or finch family. It would be amazing to see a flock of a million of these little guys.

Beautiful bird I never heard of.

Oh to be able to see such a huge flock!!! Great photos!!!

I've never seen or heard of this bird before, but I looked it up under "Birds of Alberta" and voila, there it was. Who knew?
Perhaps if I saw one, I might have thought it was some kind of goldfinch, certainly some kind of finch, because of its beak.
Very interesting. Thank you!

I've never seen this bird. I must say he looks rather sharp. I will have to look him up in my bird book to see if he is found in this area.

That dickcissel looks comfortable in that branches, what a great photography

Equally photographs are generally remarkable. I must come back usually to understand more about chickens out of your website. If you haven't already, have you considered creating the sunday paper together with your photographs and knowledge